The Field Strength Meter is used to measure the radiation intensity from a transmitting antenna at a given location. With its own small antenna, it is essentially a simple receiver with an indicator.

The wavemeter circuit with a rectifier-meter indicator, as shown in Fig. 10.2(a), is often equipped with a small whip antenna, and is called as a Field strength meter. (Although it is possible to obtain an indication with this setup when the whip antenna of the meter is positioned fairly close to the transmitting antenna, the sensitivity is generally not high enough for use with ordinary low-powered transmitters or test radiations.) 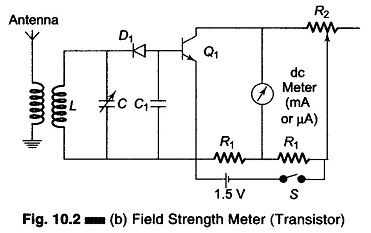 The Field Strength Meter measurement should be made at a distance of several wavelengths from the transmitting antenna, to avoid misleading readings when the pickup is obtained from a combination of radiation field with the induction field close to the transmitter. To enable the wave meter combination to act as a field strength meter, greater sensitivity can be easily obtained with the addition of a transistor dc amplifier, as shown in Fig. 10.2(b). (The coil L is held near an oscillating circuit to provide loose coupling, and the capacitor C is tuned to resonance. When the dial of the variable capacitor is calibrated in terms of frequency, the unit becomes very useful as a rough frequency meter. Since the wavemeter is tuned to resonance, it will absorb the greatest amount of energy, and cause a detectable change in an indicating meter of the transmitter.)

The transistor provides ample current gain, so that satisfactory sensitivity is obtained. The transistor is connected in a common emitter configuration. With no signal being received, the quiescent current is balanced out by the back up current, through the variable resistor R2. This zero balance should be checked at intervals, since the quiescent current is sensitive to temperature changes.

The collector current through the meter provides an indication of the strength of the RF wave being picked up. This current is not strictly proportional to the field strength, because of the combined non-linearities of the semiconductor diode and transistor. However, the response is satisfactory for the relative comparison of Field Strength Meter Circuit.