The Field Control Method of DC Shunt Motor are in general much more adaptable speed drives than ac motors which are associated with a constant-speed rotating field. Indeed one of the primary reasons for the strong competitive position of dc motors in modern industrial drives is the wide range of speeds afforded.

Since the armature drop is small, it can be neglected.

This equation gives us two methods of effecting speed changes, i.e. the variation of field excitation, If and that of terminal voltage, V. The first method causes a change in the flux per pole, Φ and is known as the field control and the second method is known as the armature control.

which for linear magnetization implies

Figure 7.53(a) illustrates the field control for shunt motors; the control being achieved by means of a rheostat in the field circuit. Reproducing Eq. (7.55) here for convenience: 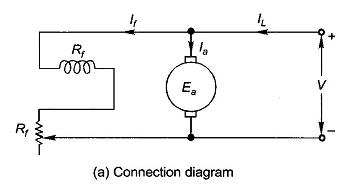 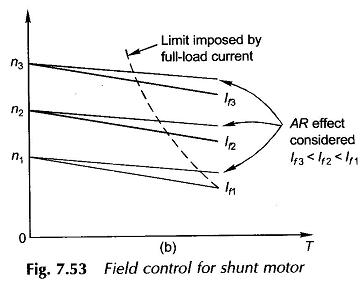