What is Shunt Compensation in Power System?:

Shunt Compensation are connected in shunt at various system nodes (major substations) and sometimes at mid-point of lines. These serve the purposes of voltage control and load stabilization. As a result of installation of shunt compensation in the system, the nearby generators operate at near unity pf and voltage emergencies mostly do not arise. The two kinds of compensators in use are:

It is to be pointed out here that SVC and STATCOM are static var generators which are thyristor controlled. In this section SVC will be detailed while STATCOM forms a part of FACTS.

Since static var compensators use switching for var control. These are also called static var switches or systems. It means that terminology wise

and we will use these interchangeably.

Capacitor or capacitor and inductor bank can be –varied stepwise or continuously by thyristor control. Several important SVS configurations have been devised and are applied in shunt line compensation. Some of the static compensators schemes are discussed in what follows.

This is a multi-core reactor with the phase windings so arranged as to cancel the principal harmonics. It is considered as a constant voltage reactive source. It is almost maintenance free but not very flexible with respect to operating characteristics.

A thyristor-controlled-reactor (Fig. 15.3) compensator consists of a combina­tion of six pulse or twelve pulse thyristor-controlled reactors with a fixed shunt capacitor bank. The reactive power is changed by adjusting the thyristor firing angle. TCRs are characterized by continuous control, no transients and generation of harmonics. The control system consists of voltage (and current) measuring devices, a controller for error-signal conditioning, a linearizing circuit and one or more synchronizing circuits.

It consists of only a thyristor-switched capacitor bank which is split into a number of units of equal ratings to achieve a stepwise control (Fig. 15.4).

As such they are applied as a discretely variable reactive power source, where this type of voltage support is deemed adequate. All switching takes place when the voltage across the thyristor valve is zero, thus providing almost transient free switching. Disconnection is effected by suppressing the firing plus to the thyristors, which will block when the current reaches zero. TSCs are characterized by step wise control, no transients, very low harmonics, low losses, redundancy and flexibility. 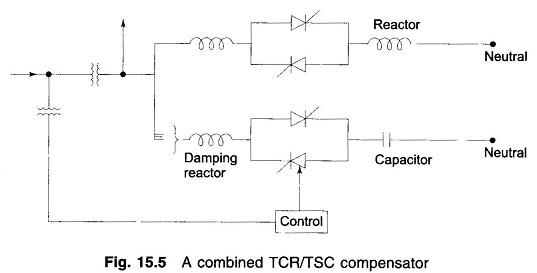 A combined TSC and TCR (Fig. 15.5) is the optimum solution in majority of cases. With this, continuous variable reactive power is obtained throughout the complete control range. Furthermore full control of both inductive and capacitive parts of the compensator is obtained. This is a very advantageous feature permitting optimum performance during large disturbances in the power system (e.g. line faults, load rejection etc) TSC/TCR combinations are characterized by continuous control, no transients, low generations of harmon­ics, low losses, redundancy, flexible control and operation.

The basic characteristics of the main static var generator schemes are given in Table 15.1. 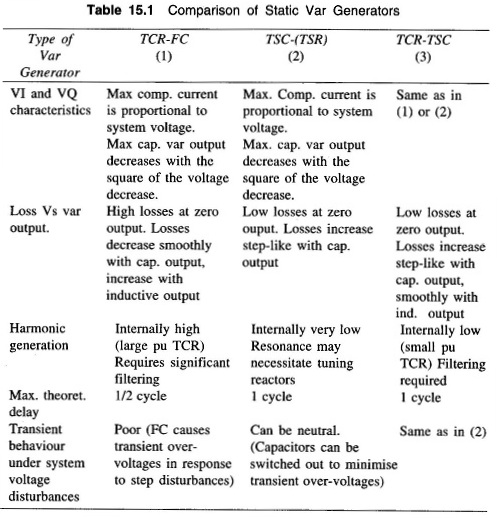