Methods of Compensation in Control System:

The Different Methods of Compensation in Control System are

A drive system having closed loop control may not be satisfactory with regard to its stability characteristics, speed of response and steady-state accuracy. The system may be oscillatory or even unstable. It may have either extremely fast or very sluggish response. The errors under steady-state between the ac­tual and desired values may be excessive and not acceptable. Therefore, a necessity arises to modify the system or system parameters to provide the de­sired performance with respect to the above characteristics. This has certain practical limitations, such as size, range, and cost of available components. Sometimes there may not be any room to effect the change in the parame­ters.

The design of a Methods of Compensation in Control System network to achieve the required improvement in the performance can be based on the frequency response plots or the root locus techniques. discussed.

The compensations introduced in the closed loop system to improve the performance reshapes the root locus or frequency response of the system. With this the system is stable, has satisfactory transient response, and has a steady-state error within the acceptable tolerance level, or even sometimes zero. The purpose of providing a Methods of Compensation in Control System, either by means of reshaping the frequency response or root locus may generally fall into one of the following categories:

Ideal integral compensation increase the type of the system. An increase in the type of system completely eliminates the steady-state error. Therefore for a system having steady-state error with satisfactory transient response, a PI compensation is used (proportional and integral). Proportional control improves the stability. The improved system will have acceptable transient response.

PD compensation is used if the transient response has to be improved. It is equivalent to introducing an anticipation into the system. The derivative action increases the speed of response when the input is rapidly changing.

It has already been shown and brought out how

The controller providing compensation can be placed either in series with the plant in the forward path or in the feedback path. In the former it is called series (or cascade) compensation and in the latter parallel compen­sation. These are depicted in Fig. 6.27. The location of the compensation depends on the control system and the modifications required on the response. 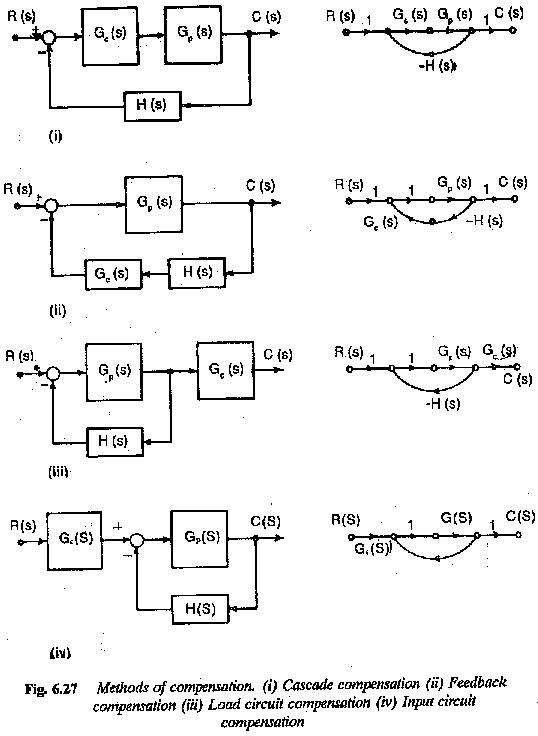