An important characteristic of any practical electric power transmission system operating in steady state is the strong interdependence between real powers and bus voltages angles and between reactive powers and voltage magnitudes. This interesting property of weak coupling between P-δ and Q-V variables gave the necessary motivation in developing the Decoupled Load Flow methods (DLF), in which P-δ and Q-V problems are solved separately.

In any conventional Newton method, half of the elements of the Jacobean matrix represent the weak coupling referred to above, and therefore may be ignored. Any such approximation reduces the true quadratic convergence to geometric one, but there are compensating computational benefits. A large number of decoupled algorithms have been developed in the literature. However, only the most popular decoupled Newton version is presented here.
In Eq. (6.67), the elements to be neglected are submatrices [N] and [J]. 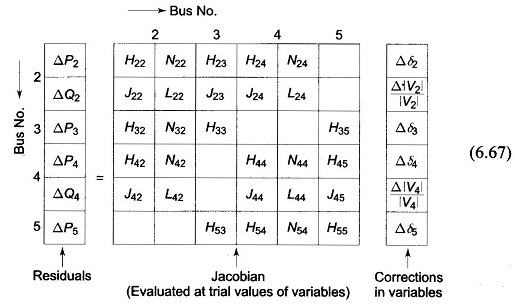 where it can be shown that

The main advantage of the Decoupled Load Flow Methods (DLF) as compared to the NR method is its reduced memory requirements in storing the Jacobean. There is not much of an advantage from the point of view of speed since the time per iteration of the DLF is almost the same as that of NR method and it always takes more number of iterations to converge because of the approximation.

Further physically justifiable simplifications may be carried out to achieve some speed advantage without much loss in accuracy of solution using the DLF model described in the previous subsection. This effort culminated in the development of the Fast Decoupled Load Flow (FDLF) method by B. Stott in 1974. The assumptions which are valid in normal power system operation are made as follows: 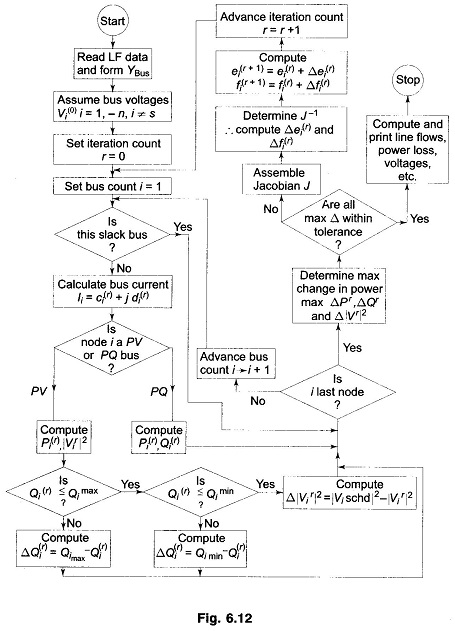 With these assumptions, the entries of the [H] and [L] submatrices will become considerably simplified and are given by

Further decoupling and logical simplification of the Fast Decoupled Load Flow FDLF algorithm is achieved by:

With the above modifications, the resultant simplified FDLF equations become

In Eqs. (6.86) and (6.87), both [B’] and [B”] are real, sparse and have the structures of [H] and [L], respectively. Since they contain only admittances, they are constant and need to be inverted only once at the beginning of the study. If phase shifters are not present, both [B’] and [B”] are always symmetrical, and their constant sparse upper triangular factors are calculated and stored only once at the beginning of the solution.
Equations (6.86) and (6.87) are solved alternatively always employing the most recent voltage values. One iteration implies one solution for [Δδ], to update [δ] and then one solution for [Δ|V|] to update [|V|] to be called 1-δ and 1-V iteration. Separate convergence tests are applied for the real and reactive power mismatches as follows:

where εP and εQ are the tolerances.

A flow chart giving FDLF algorithm is presented in Fig. 6.13.