The Newton Raphson Method for Load Flow Analysis is a powerful method of solving non-linear algebraic equations. It works faster and is sure to converge in most cases as compared to the GS method. It is indeed the practical method of load flow solution of large power networks. Its only drawback is the large requirement of computer memory which has been overcome through a compact storage scheme. Convergence can be considerably speeded up by performing the first iteration through the GS method and using the values so obtained for starting the NR iterations. Before explaining how the NR method is applied to solve the load flow problem, it is useful to review the method in its general form.

Let Δx01, Δx02, …, Δx0n be the corrections, which on being added to the initial guess, give the actual solution. Therefore

Expanding these equations in Taylor series around the initial guess, we have

or in vector matrix form

J0 is known as the Jacobian matrix (obtained by differentiating the function vector f with respect to x and evaluating it at x0). Equation (6.56b) can be written as

Approximate values of corrections Δx0 can be obtained from Eq (6.57). These being a set of linear algebraic equations can be solved efficiently by triangularization and back substitution.

Updated values of x are then

Iterations are continued till Eq. (6.53) is satisfied to any desired accuracy, i.e.

First, assume that all buses are PQ buses. At any PQ bus the load flow solution must satisfy the following non-linear algebraic equations

while the vector of corrections , Δx0 corresponds to

Equation (6.57) for obtaining the approximate corrections vector can be written for the load flow case as

It is to be immediately observed that the Jacobian elements corresponding to the ith bus residuals and mth bus corrections are a 2 x 2 matrix enclosed in the box in Eq. (6.62a) where i and m are both PQ buses.

Consider Newton Raphson Method for Load Flow Analysis Formula now the presence of PV buses. If the ith bus is a PV bus, Qi is unspecified so that there is no equation corresponding to Eq. (6.60b) for this bus. Therefore, the Jacobian elements of the ith bus become a single row pertaining to ΔPi , i.e.

It is convenient for numerical solution to normalize the voltage corrections

as a consequence of which, the corresponding Jacobian elements become

Expressions for elements of the Jacobian (in normalized form) of the load flow Eqs. (6.60a and b) are given below:

Thus the Jacobian is as sparse as the YBUS matrix. 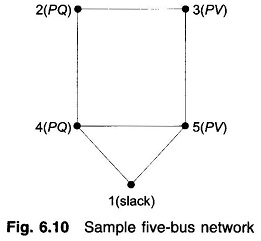 Formation of Eq. (6.62) of the NR method is best illustrated by a problem. Figure 6.10 shows a five-bus power network with bus types indicated therein. The matrix equation for determining the vector of corrections from the vector of residuals is given below.

Corresponding to a particular vector of variables [δ2|V2|δ3δ4|V4|δ5]T, the vector of residuals [ΔP2 ΔQ2 ΔP3 ΔP4 ΔQ4 ΔP5]T and the Jacobian (6 x 6 in this example) are computed. Equation (6.67) is then solved by triangularization and back substitution procedure to obtain the vector of corrections

Corrections are then added to update the vector of variables. 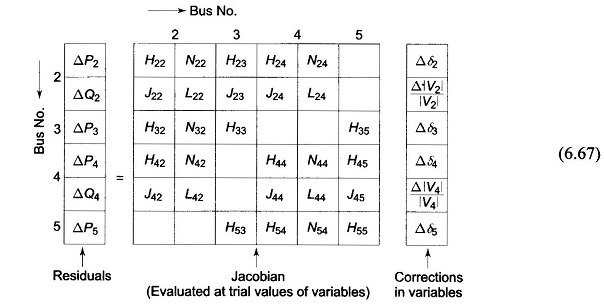 Omitting programming details, the iterative algorithm for the solution of the load flow problem by the NR method is as follows: