Bus Impedance Matrix Method of fault analysis, given for symmetrical faults  can be easily extended to the case of unsymmetrical faults. Consider for example an LG fault on the rth bus of a n-bus system. The connection of sequence networks to simulate the fault is shown in Fig. 11.25. 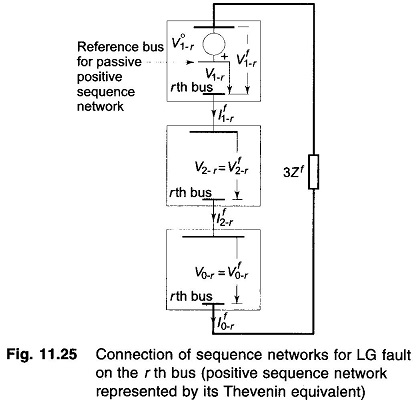 It may be noted that subscript a has been dropped in sequence currents and voltages, while integer subscript is introduced for bus identification. Super­scripts o and f respectively, indicate prefault and postfault values.

For the passive positive sequence network

For the negative sequence network

The negative sequence network is injected with current If2-r at the rth bus only. Therefore,

Similarly, for the zero sequence network

From the sequence network connection of Fig. 11.25, we can now write

Sequence currents for other types of faults can be similarly computed using Z1-rr, Z2-rr and Z0-rr in place of Z1, Z2 and Z0 with Ea = V°1-r.

Postfault sequence voltages at any bus can now be computed by superposing on prefault bus voltage, the voltage developed owing to the injection of appropriate sequence current at bus r.

For passive positive sequence network, the voltage developed at bus i owing to the injection of -If1-r at bus r is

Hence postfault positive sequence voltage at bus i is given by

Similarly, the postfault zero sequence bus voltages are given by

With postfault sequence voltages known at the buses, sequence currents in lines can be computed as:

It appears at first, as if this method is more laborious than computing fault currents from Thevenin impedances of the sequence networks, as it requires computation of Bus Impedance Matrix Method of all the three sequence networks. It must, however, be pointed out here that once the bus impedance matrices have been assembled, fault analysis can be conveniently carried out for all the buses, which, in fact, is the aim of a fault study. Moreover, Bus Impedance Matrix Method can be easily modified to account for changes in power network configuration.