Most of the Symmetrical Faults on 3 Phase System on the power system lead to a short-circuit condition. When such a condition occurs, a heavy current (called short circuit current) flows through the equipment, causing considerable damage to the equipment and interruption of service to the consumers. There is probably no other subject of greater importance to an electrical engineer than the question of determination of short circuit currents under fault conditions. The choice of apparatus and the design and arrangement of practically every equipment in the power system depends upon short-circuit current considerations.

The symmetrical fault occurs when all the three conductors of a 3-phase line are brought together simultaneously into a short-circuit condition as shown in Fig. 17.1. This type of fault gives rise to symmetrical currents L e. equal fault currents with 120° displacement. Thus referring to Fig. 17.1, fault currents IR, ly and IB will be equal in magnitude with 120° displacement among them. Because of balanced nature of fault, only one phase need be considered in calculations since condition in the other two phases will also be similar. 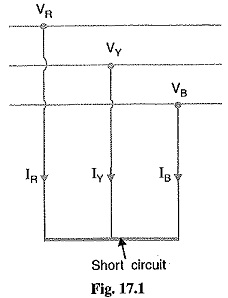 The following points may be particularly noted :

In many situations, the impedances limiting the Symmetrical Faults on 3 Phase System current are largely reactive, such as trans­formers, reactors and generators. Cables and lines are mostly resistive, but where the total reactance in calculations exceeds 3 times the resistance, the latter is usually neglected. The error introduced by this assumption will not exceed 5%.