Symmetrical Component Transformation is given by a  set of three balanced voltages (phasors) Va,Vb,Vc is characterized by equal magnitudes and interphase differences of 120°. The set is said to have a phase sequence abc (positive sequence) if Vb lags Va by 120° and Vc lags Vb by 120°.

where the complex number operator α is defined as

It has the following properties

If the phase sequence is acb (negative sequence), then

Thus a set of balanced phasors is fully characterized by its reference phasor (say Va) and its phase sequence (positive or negative).

A set of three voltages (phasors) equal in magnitude and having the same phase is said to have zero sequence. Thus a set of zero sequence phasors is written as

Consider now a set of three voltages (phasors) Va,Vb,Vc which in general may be unbalanced. According to Fortesque’s theorem the three phasors can be expressed as the sum of positive, negative and zero sequence phasors defined above. Thus 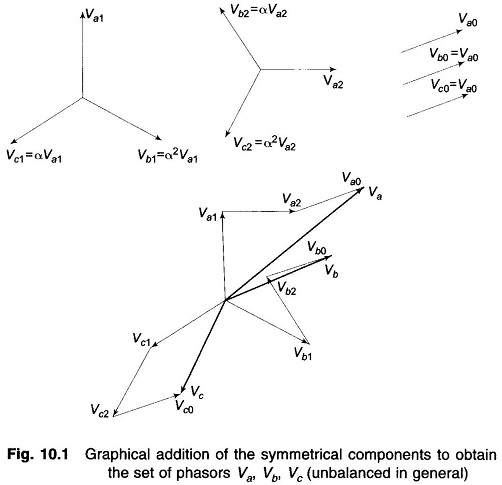 These equations can be expressed in the matrix form

The symmetrical component transformation though given above in terms of voltages hold for any set of phasors and therefore automatically apply for a set of currents. Thus

Of course A and A-1 are the same as given earlier.

(i) Construction of current phasors from their symmetrical components:

Certain observations can now be made regarding a three-phase system with neutral return as shown in Fig. 10.2. 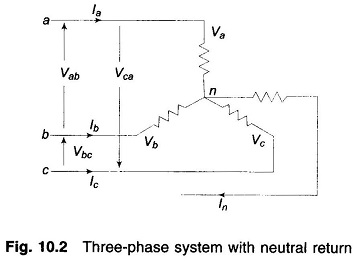 The sum of the three line voltages will always be zero. Therefore, the zero sequence component of line voltages is always zero, i.e.

On the other hand, the sum of phase voltages (line to neutral) may not be zero so that their zero sequence component Va0 may exist.

Since the sum of the three line currents equals the current in the neutral wire, we have

i.e. the current in the neutral is three times the zero sequence line current. If the neutral connection is severed,

i.e. in the absence of a neutral connection the zero sequence line current is always zero.

Total complex power in a three-phase circuit is given by