What is Frequency Response of an Amplifier?

If the input voltage of an amplifier is kept constant but its frequency is varied, it is observed that the amplifier gain

The performance of an amplifier depends to a considerable extent upon its frequency response. In the design of an ac amplifier, appropriate steps are taken to ensure that gain is essentially uniform over some specified frequency range.

A typical graph of an ac amplifier output voltage or power plotted versus frequency is shown in Fig. 15.1. It is found that the output normally remains constant over a middle range of frequencies and falls off at low and high frequencies. The gain over this middle range is termed the mid frequency gain. The low frequency and high frequency at which gain falls by 3 dB are designated f1 and f2 respectively. This range is normally considered the useful range of operating Frequency Response of an Amplifier, and the frequency difference (f2 – f1) is termed the amplifier bandwidth. 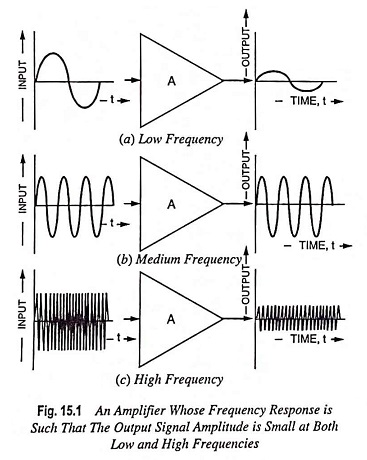 Frequencies f1 and f2 are referred to as -3 dB frequencies, down 3 dB frequencies or 3 dB loss frequencies because the power output is – 3 dB from its normal level when P2 is half of P1. The points A and B in Fig. 15.2 are called 3 dB (sometimes -3 dB) or half-power points. When the amplifier output is expressed as a voltage on the graph of Frequency Response of an Amplifier, the 3 dB points (f1 and f2) occur when V2 is 0.707 V1. 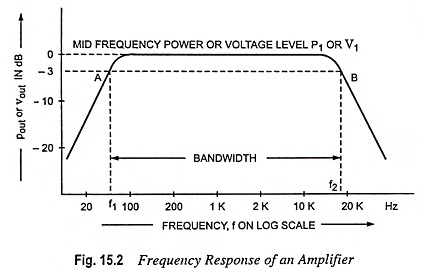 At low frequencies, the voltage gains fall because the coupling and bypass capacitors no longer act like short circuits. Instead, their capacitive reactances are large enough to drop some of the ac signal voltage. The result is a loss of voltage gain as we approach zero hertz (0 Hz). 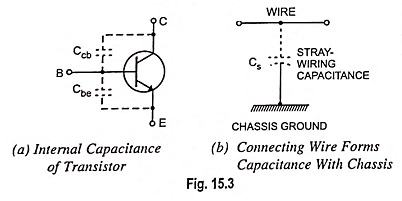 At high frequencies, the voltage gain falls for other reasons. All transistors have capacitances between their terminals, known as internal capacitances, as illustrated in Fig. 15.3 (a). These capacitances provide bypass path for the ac signal. With the increase in frequency, capacitive reactances become low enough (XC α 1/f) to prevent normal transistor action. The result is a loss of voltage gain.

Stray-wiring capacitance is another reason for a loss of voltage gain at high frequencies [Fig. 15.3 (b)]. Any connecting wire in a transistor circuit acts like one plate of a capacitor, and the chassis ground acts like the other plate. The stray-wiring capacitance that exists between this wire and ground is unwanted. At higher frequencies, its low capacitive reactance prevents the ac current from reaching the load resistor. This is equivalent to saying that the voltage gain drops off.

Equivalent Circuits of Frequency Response of an Amplifier:

Each capacitor in a circuit is important to only one end of the frequency spectrum. That is why, we can develop specific equivalent circuits that apply to low-frequency range, to midband, and to the high-frequency range.

Although an amplifier normally operates in the midband frequency range, but sometimes we are to know the voltage gain outside the midband. Voltage gain (approximate value) of an ac amplifier can be computed from the relation.

Equation (15.1) is not as formidable as it first appears. There are only three frequency ranges to analyze: the midband, below midband, and above midband. In the midband f1/f ≈ 0 and f/f2 ≈ 0. Therefore, both radicals in Eq. (15.1) are approximately unity, and Eq. (15.1) simplifies to :