Choice of frequency: The Intermediate Frequency Amplifier (IF) of a receiving system is usually a compromise, since there are reasons why it should be neither low nor high, nor in a certain range between the two.

The following are the major factors influencing the choice of the Intermediate Frequency Amplifier in any particular system:

Frequencies used: As a result of many years experience, the previous requirements have been translated into specific frequencies, whose use is fairly well standardized throughout the world (but by no means compulsory). These are as follows:

By and large, services covering a wide frequency range have IFs somewhat below the lowest receiving frequency, whereas other services, especially fixed-frequency microwave ones, may use Intermediate Frequency Amplifier as much as 40 times lower than the receiving frequency. 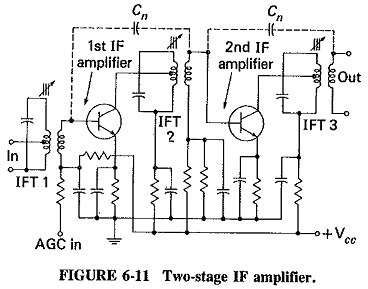 The IF amplifier is a fixed-frequency amplifier, with the very important function of rejecting adjacent unwanted frequencies. It should have a frequency response with steep skirts. When the desire for a flat-topped response is added, the resulting recipe is for a double-tuned or stagger-tuned amplifier. Whereas FET and integrated circuit IF amplifiers generally are (and vacuum-tube ones always were) double-tuned at the input and at the output, bipolar transistor amplifiers often are single-tuned. A typical bipolar IF amplifier for a domestic receiver is shown in Figure 6-11. It is seen to be a two-stage amplifier, with all IF transformers single tuned. This departure from a single-stage, double-tuned amplifier is for the sake of extra gain, and receiver sensitivity.

Although a double-tuned circuit, such as those shown in Figures 6-12 and 6-13, rejects adjacent frequencies far better than a single-tuned circuit, bipolar transistor amplifiers, on the whole, use single-tuned circuits for interstage coupling. The reason is that greater gain is achieved in this way because of the need for tapping coils in tuned circuits. This tapping may be required to obtain maximum power transfer and a reduction of tuned circuit loading by the transistor. Since transistor impedances may be low, tapping is employed, together with somewhat lower inductances than would have been used with tube circuits. If a double-tuned transformer were used, both sides of it might have to be tapped, rather than just one side as with a single-tuned transformer. Thus a reduction in gain would result. Note also that neutralization may have to be used (capacitors Cn in Figure 6-11) in the transistor IF amplifier, depending on the frequency and the type of transistor employed.

When double tuning is used, the coefficient of coupling varies from 0.8 times critical to critical, overcoupling is not normally used without a special reason. Finally, the IF transformers are often all made identical so as to be interchangeable.