For analysis, we will consider the loaded voltage-divider BJT bias configuration. But the results can be applied to any configuration. For the network shown in Fig. 15.14 the capacitors Cin, Cout and CE will determine the low frequency response of BJT Amplifier.

Now we will examine the impact of each independently. 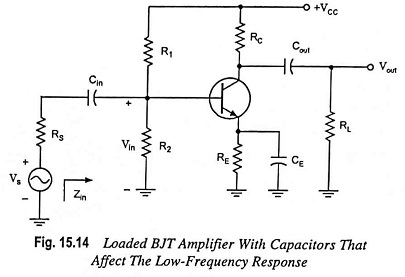 Effect of Cin on Frequency Response of Amplifier:

Since Cin is normally con­nected between the applied source and the active device, the general form of the R-C combination is established by the network shown in Fig. 15.15. 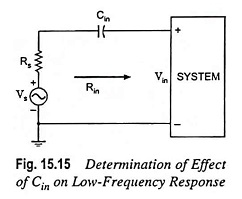 At mid or high frequencies, the reactance of the capacitor Cin will be considerably small to allow a short-circuit approximation for the element. The relation between Vin and Vs is given as

At fLi, input voltage Vin will be 0.707 times the value determined by above Eq. (15.38), assuming that Cin is the only capacitive element that controls the Low Frequency Response of BJT Amplifier.

For the network given in Fig. 15.14, in analysis of the effects of Cin, we must assume that the capacitors CE and Cout are performing their de-signed function or the analysis becomes too unwieldy, that is, that the magnitudes of the reactances of Cout and CE allow using a short-cir­cuit equivalent as compared to the magnitude of the other series impedances. Using this hypothesis, the ac equivalent network for the input section of the circuit shown in Fig. 15.14 will become as shown in Fig. 15.16. 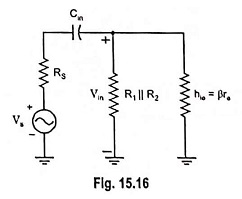 The value of Rin is given by the equation

Thus with the decrease in frequency, the reactance of the capacitor Cin increases, some of the signal or source voltage is lost across the input capacitor Cin and the voltage Vin applied to the input of the device is reduced resulting in decrease in output voltage and hence the gain.

Effect of Cout on Frequency Response of Amplifier: 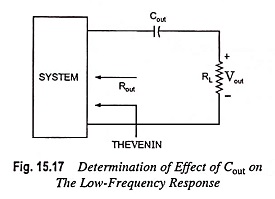 The value of Rout is given by the equation

Effect of CE on Frequency Response of Amplifier:

For determination of frequency fLe, the network “seen” by CE must be determined as illustrated in Fig. 15.19. 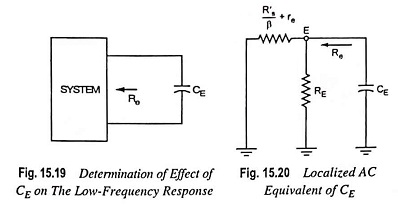 Once the level of Re is determined, the cutoff frequency due to CE can be computed from the relation

The value of Re is given by the equation

The effect of CE on the gain is best described in a quantitative manner by recalling that the gain for the configuration shown in Fig. 15.21 is given as

The maximum gain will obviously be for RE = 0 Ω. At low frequencies, with the bypass capacitor CE is its “open-circuit” equivalent state, all of RE appears in the above voltage gain equation, resulting in minimum gain. 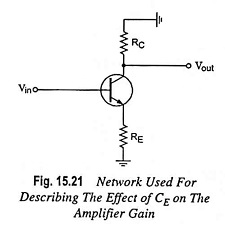 With the increase in frequency, the reactance of capacitor CE decreases, reduc­ing the parallel impedance of RE and CE until the resistor RE is effectively “shorted out” by CE. The result is a maximum or midband gain given by equation Av = -RC/re. At fLE the gain will be 3 dB down the midband value determined with RE “shorted out.”