During the discussion made for various biasing methods for providing stability to the operating point we have seen that self bias (or potential divider bias) and collector-to-base bias circuits provide better operating point stability but in both arrangements the stabilization is provided due to negative feedback action of the circuit. Although the negative feedback improves the operating point stability but it also reduces drastically the amplification of the signal. In certain applications, the loss in the signal gain may be intolerable and in such cases it is better to use Bias Compensation techniques in order to reduce the drift of the operating point. Sometimes both stabilization and bias compensation techniques are used for providing excellent bias and thermal stabilization. In Bias Compensation Methods temperature-sensitive devices such as diodes, transistors, thermistors, sensistors etc. are used to provide compensation for variations in currents. 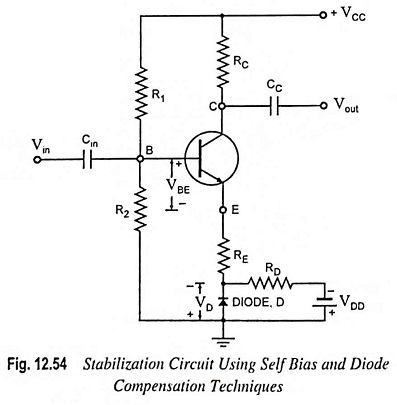 A circuit utilizing the self-bias stabilization and diode compensation is shown in Fig. 12.54. The Thevenin’s equivalent circuit is given in Fig. 12.55. The diode is kept forward biased by the source VDD and resistor RD. The diode employed is of the same material and type as the transistor and as a consequence the voltage across the diode has the same temperature coefficient (-2.5 mV per °C) as VBE of the transistor. 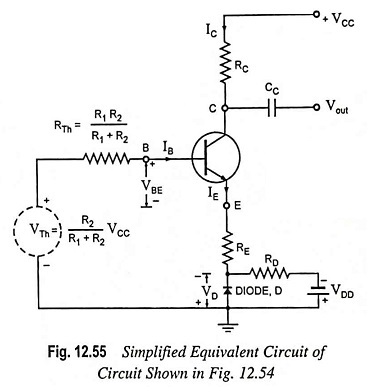 Applying Kirchhoff’s voltage law to the base portion of the circuit shown in Fig. 12.55, we have 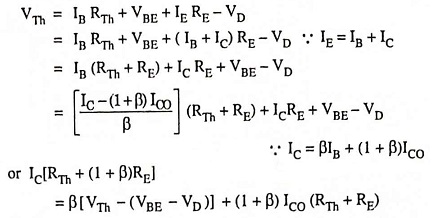 Diode Compensation For Variations in ICO

We have seen that in silicon transistors the variations in base-emitter voltage VBE due to temperature variations contribute significantly towards collector current variations. On the other hand, in case of germanium transistors, changes in reverse saturation current ICO with temperature variations result in more serious problem in collector current stability. The circuit using diode compensation for a germanium transistor amplifier is given in Fig. 12.56. The diode D used in circuit is of the same material and type as the transistor. So the reverse saturation current of transistor ICO and that of the diode, I0 will increase at the same rate with the increase in temperature. 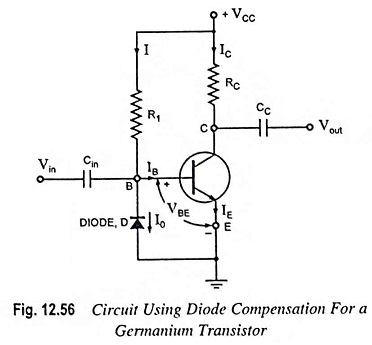 Since diode is reverse biased by base-emitter voltage VBE (0.3 V in case of Ge transistor), the current through diode is the reverse saturation current I0.

Substituting IB = (I – I0) in equation of collector current,

From Eq. (12.49) it is obvious that if β ≫ 1 and if I0 of diode and ICO of transistor track each other over the desired temperature range, then collector current IC remains essentially constant. 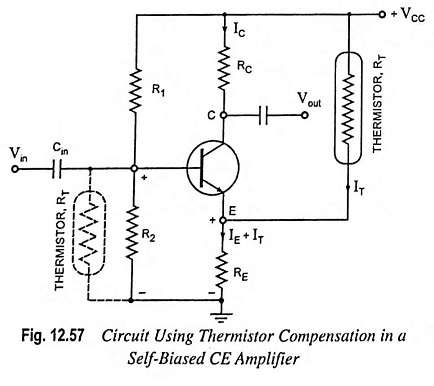 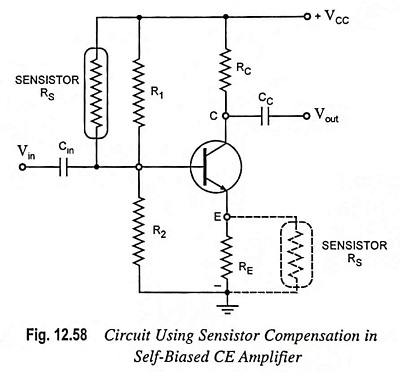 The same result is obtained if the sensistor RS is placed in parallel with (or in place of) emitter resistor RE.