An ohmic contact may be defined as a metal-semiconductor contact that has a negligible contact resistance compared with the bulk or spreading resistance of the semiconductor. A satisfactory ohmic contact should not significantly perturb device performance, and it can supply the required current with a voltage drop that is considerably small compared with the drop across the active region of the device. Ideally, the current through the ohmic contact is a linear function of applied voltage, and the applied voltage should be very small.

After overcoming the barrier potential (or offset voltage), all that impedes the diode current is the resistance of the P and N regions, symbolized by the rP and rN in Fig. 6.50, if ohmic contact resistance is neglected. The sum of these resistances is called the bulk resistance rB of the diode i.e.,

The graph plotted between the potential difference across the P-N junction and the circuit current is known as volt-ampere characteristic of a P-N junction.

1. Forward Characteristics: When the external voltage is zero i.e., when the circuit is open, the potential barrier at the junction does not allow the flow of current and, therefore, the circuit current is zero, as shown in Fig. 6.51. 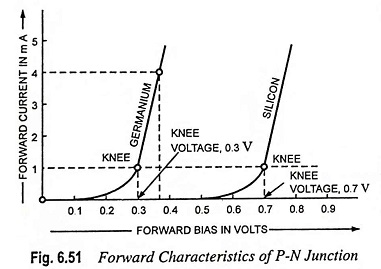 Because of the nonlinear knee of the curve, if a very small signal voltage is applied to the diode so that it only operates around the knee, the signal will be distorted. The signal must, therefore, be large enough to operate the diode over the linear part of the characteristic. Forward resistance of P-N junction is low (of the order of 75 Ω in case of Ge and 150 Ω in case of Si). 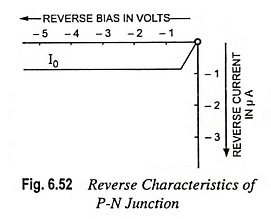 For silicon the reverse current is typically less than 1 μA and may be as low as 1 nA. In case of germanium, the reverse current may exceed 10 μA. Only a very small reverse voltage is necessary to direct all available minority carriers across the junction, and when all minority carriers are flowing across, further increase in bias voltage will not increase the current. This current is referred to as a reverse saturation current and is designated as I0. Reverse resistance is very high (of the order of MΩ).

Power dissipation for a diode can be computed in the same way as in case of a resistor. It is equal to the product of diode voltage and current i.e.,

The power rating, which is defined as the maximum power the diode can safely dissipate without shortening its life or degrading its properties, may be given as