Two blocks of PN Junction Semiconductor material are represented in Fig. 1-17; one block is p-type material, and the other is n-type. The small circles in the p-type material represent holes, which are the majority charge carriers in p-type. The dots in the n-type material represent the majority charge carrier free electrons within that material. Normally, the holes are uniformly distributed throughout the volume of the p-type semiconductor, and the electrons are uniformly distributed in the n-type. 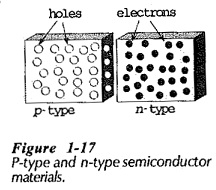 In Figure 1-18, PN Junction Semiconductor materials are shown side by side, representing a PN Junction. Holes and electrons are close together at the junction, so some free electrons from the n-side are attracted across the junction to fill adjacent holes on the p-side. They are said to diffuse across the junction from a region of high carrier concentration to one of low concentration. The free electrons crossing the junction create negative ions on the p-side by giving some atoms one more electron than their total number of protons. The electrons also leave positive ions (atoms with one fewer electron than the number of protons) behind them on the n-side. 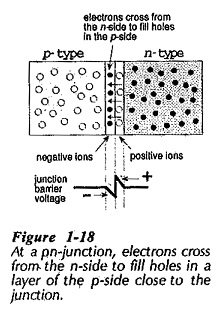 The magnitude of the barrier voltage in pn junction Semiconductor can be calculated from a knowledge of the doping densities, electronic charge, and junction temperature. Typical barrier voltages at 25°C are 0.3 V for germanium junctions and 0.7 V for silicon. 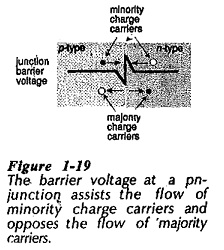 The movement of charge carriers across the junction leaves a layer on each side which is depleted of charge carriers. This is the Depletion Region in PN Junction shown in Fig. 1-20(a). On the n-side, the depletion region consists of donor impurity atoms which, having lost the free electron associated with them, have become positively charged. 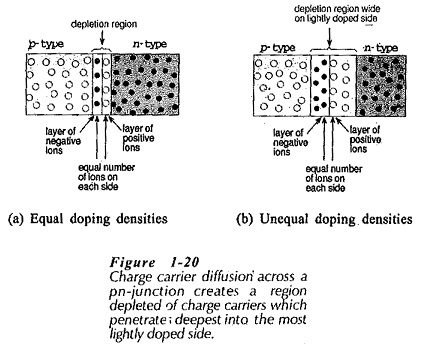 The depletion region on the p-side is made up of acceptor impurity atoms which have become negatively charged by losing the hole associated with them. (The hole has been filled by an electron.)