Correlation Between Frequency and Transient Response:

As has been stated, the use of frequency response for the design of control systems requires a Correlation Between Frequency and Transient Response. Time response specifications are available for the performance of a system. These must be translated to frequency response. There must be frequency domain specifications also, corresponding to the time domain specifications, such as overshoot, settling time, etc. However, it is easy to have a direct Correlation Between Frequency and Transient Response of a second order system. A typical magnitude plot of a second order system is shown in Fig. 6.17. 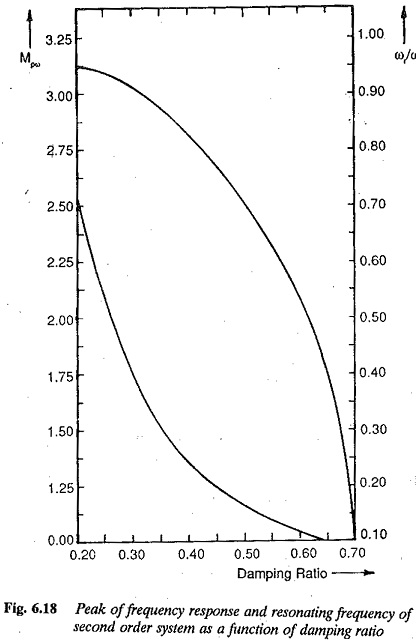 The frequency domain specifications are therefore

3.The closeness of the polar plot of frequency response to (-1, 0) point indicates the peak overshoot of the time response. This also gives the relative

For higher order systems having a dominant pair of complex conjugate poles, the following correlation exists between the transient and frequency responses:

1.The peak magnitude of frequency response indicates the relative stability. A system having a peak amplitude in the range of 1 to 1.4 would have a time response with an effective damping ratio in the range of 0.4 to 0.7.

2.If the peak amplitude of the frequency response is greater than 1.5 the time response is oscillatory, having a large overshoot.

4.The system is highly damped if the resonant frequency and damped nat­ural frequency are close to each other.

5.Larger values of to ωr characterize larger bandwidth. However, in view of the noise the system should not have large bandwidth. Larger the bandwidth costlier is the system. A compromise is required.

6.Cut off frequency (frequency at which the amplitude is 3 db below the zero frequency value) characterises the filtering characteristics of high frequency

7.The slope of the log-magnitude curves known as cut off rate gives the ability of the control system to distinguish between noise and signal.