What is Excess-3 Code? (Definition and Examples)

The excess-3 code for a decimal number can be obtained in the same manner as BCD except that 3 is added to each decimal digit before encoding it in binary. For example, to encode the decimal digit 5 into excess-3 code, we must first add 3 to obtain 8. The digit 8 is encoded in its equivalent 4-bit binary code 1000. As another example, let us convert 26 into its excess-3 code representation. 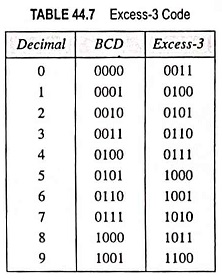 It should be noted that the 1’s complement is easily produced with digital logic circuits by simply inverting each bit. The self-complementing property makes the excess-3 code useful in some arithmetic operations, because subtraction can be performed using the 9’s complement method.