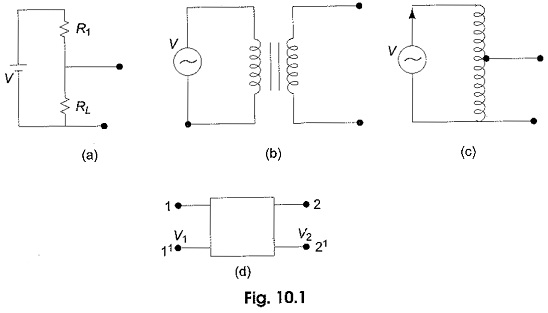 A majority of the electrical circuits in practice are conductively or electromagnetically coupled. Certain coupled elements are frequently used in network analysis and synthesis. Transformer, transistor and electronic pots, etc. are some among these circuits. Each of these elements may be represented as a two port network as shown in Fig. 10.1(d).

A conductively Coupled Circuits which does not involve magnetic coupling is shown in Fig. 10.2(a).

In the circuit shown the impedance Z12 or Z21 common to loop 1 and loop 2 is called mutual impedance. It may consists of a pure resistance, a pure inductance, a pure capacitance or a combination of any of these elements.

The general definition of mutual impedance is explained with the help of Fig. 10.2 (b).

The network in the box may be of any configuration of circuit elements with two ports having two pairs of terminals 1-1′ and 2-2′ available for measurement. The mutual impedance between port 1 and 2 can be measured at 1-1′ or 2-2′. If it is measured at 2-2′.