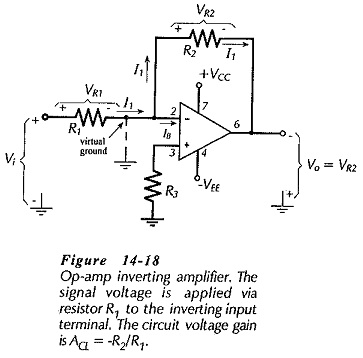 The circuit input current in Fig. 14-18 can be calculated as,

The input voltage is applied to one end of R1, and the other end of R1 is at ground level. Consequently,

I1 is always selected to be very much larger than the op-amp input bias current (IB). Consequently, virtually all of I1 flows through resistor R2, (see Fig.14-18), and the voltage drop across R2 is,

The left side of R2 is connected to the op-amp inverting input terminal, which, as discussed, is always at ground level. This means that the right side of R2 (the output terminal) is VR2 below ground. So,

So, the circuit voltage gain is,

The input impedance of an inverting amplifier is easily determined by recalling that the right side of R1 (in Fig. 14-18) is always at ground level, and that the signal is applied to the left side of R1. Therefore,

Design of an inverting amplifier is very simple. Voltage divider current I1 is selected very much larger than the op-amp input bias current. Resistors R1 and R2 are calculated from Eqs. 14-10 and 14-11, or 14-12, and R3 is selected approximately equal to R1||R2. 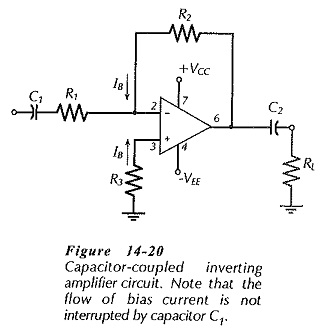 Apart from the selection of R3, the circuit is designed exactly as the Direct Coupled Inverting Amplifier, and the capacitor values are calculated in the same way as for a capacitor-coupled noninverting amplifier.