The binary number system forms the natural choice for the two-state systems. But in this system, the numbers tend to get short rather long. Hence to reduce the length of a given number it is quite common to use hexadecimal system. The hexadecimal number system has a base of 16 : that is, it is composed of 16 digits and characters. It uses the digits 0 through 9 plus the letters A, B, C, D, E and F. Since numeric digits and alphabets both are used to represent the digits in the hexadecimal number system, this is an alphanumeric number system. Table 44.3 shows the relationship between hexadecimal, decimal and binary. It is important to note that hex (abbreviation for hexadecimal) digits A through F are equivalent to the decimal values 10 through 15.

From the Table 44.3, it is observed that there are 16 combi­nations of 4-bit binary numbers and sets of 4-bit binary numbers can be entered in the computer in the form of hexadecimal (hex) digits. These numbers are required to be converted into binary representations using hexadecimal-to-binary converter circuits before these can be processed by the digital circuits. This system is extensively used in microprocessor work. 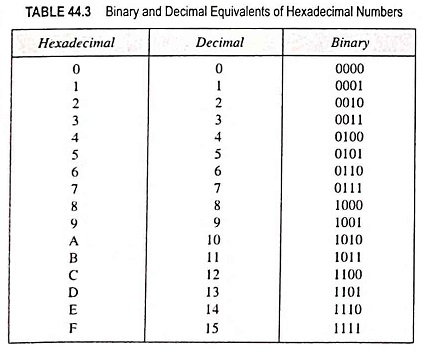 How do we count in hexadecimal number system once we get to F ? Simply start over with another column and continue as follows:

A hexadecimal number can be converted to its decimal equivalent by multiplying each hex digit by its weight and then taking the sum of these products. The weights of a hex number are increasing powers of 16 (from right to left). For a four-digit hex number the weights are as follows:

For illustration let us consider some examples.

Solution: Converting each hexadecimal digit to binary number of bit we have

Conversion from binary to hex is just the reverse of the process above. The binary number is grouped into groups of 4-bits starting from LSB and moving towards MSB for integer part and then each group of four bits is replaced by its hex representation. Zeros are added, as required to complete a 4-bit group.

For the fractional part, the above procedure is repeated from the bit next to the binary point and moving towards the right.

Conversion From Hex-To-Octal and Vice versa.