The Electric Potential point due to a charge is the work done in bringing a unit positive charge from infinity to that point. The concept of electric potential is extremely important for the determination of capacitance in a circuit since the latter is defined as the charge per unit potential. We shall now  discuss in detail the Electric Potential Definition due to some important conductor arrangements.

1.Potential at a Charged Single Conductor:

Consider a long straight cylindrical conductor A of radius r metres. Let the conductor operate at such a potential (VA) that charge QA coulombs per metre exists on the conductor. It is desired to find the expression for VA. The electric intensity E at a distance x from the centre of the conductor in air is given by:

As x approaches infinity, the value of E approaches zero. Therefore, the potential difference between conductor A and infinity distant neutral plane is given by :

2.Potential at a Conductor in a Group of Charged Conductors:

Consider a group of long straight conductors A, B, C etc. operating at potentials such that charges QA, QB, Qc etc. coulomb per metre length exist on the respective conductors (see Fig. 9.20). Let us find the potential at A (i.e. VA) in this arrangement. Potential at A due to, its own charge (i.e. QA) 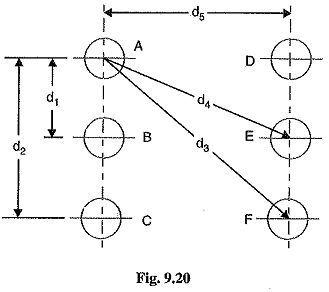 Potential at conductor A due to charge QB

Potential at conductor A due to charge Qc.

Overall potential difference between conductor A and infinite neutral plane is 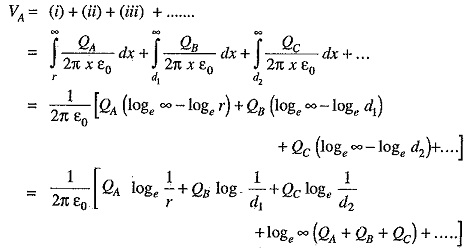