Lightning Stroke Definition explains that when the electric field intensity at some point in the charge concentrated cloud exceeds the breakdown value of the moist ionized air (≈ 10 kV/cm), an electric streamer with plasma starts towards the ground with a velocity of about 1/10 times that of the light, but may progress only about 50 m or so before it comes to a halt emitting a bright flash of light. 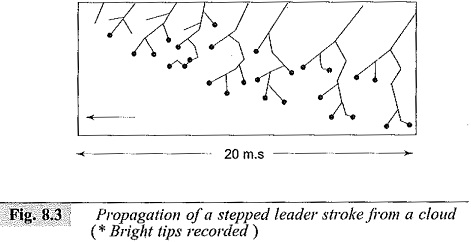 The halt may be due to insufficient build-up of electric charge at its head and not sufficient to maintain the necessary field gradient for further progress of the streamer. But after a short interval of about 100 μs, the streamer again starts out repeating its performance. The total time required for such a stepped leader to reach the ground may be 20 ms.

The path may be quite lustrous, depending on the local conditions in air as well as the electric field gradients. Branches from the initial leader may also be formed. Since the progress of this leader stroke is by a series of jumps, it is referred as stepped leader. The picture of a typical leader stroke taken with a Boy’s camera is shown in Fig. 8.3. 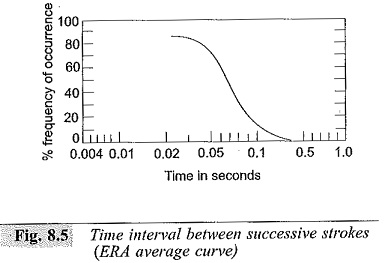 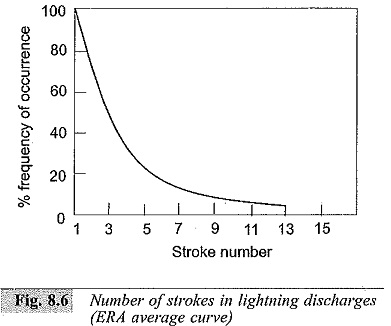 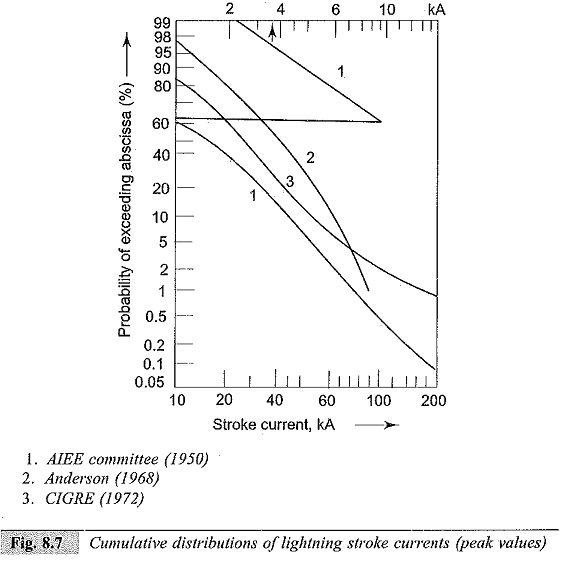 After the leader touches the ground, the return stroke follows. As the leader moves towards the ground, positive charge is directly accumulated under the head of the stroke or canal. By the time the stroke reaches the ground or comes sufficiently near the ground, the electrical field intensity on the ground side is sufficiently large to build up the path. Hence, the positive charge returns to the cloud neutralizing the negative charge, and hence a heavy current flows through the path. The velocity of the return or main stroke ranges from 0.05 to 0.5 times the velocity of light, and currents will be of the order of 1000 to 250,000 A. 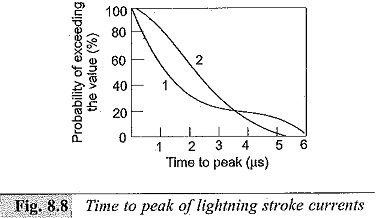 After the completion of the return stroke, a much smaller current of 100 to 1000 A may continue to flow which persists approximately 20 ms. Due to these currents the initial breakdown points in the cloud are considerably reduced and discharges concentrate towards this point. Therefore, additional reservoirs of charge become available due to penetration of a cloud mass known as preferred paths and lead to repeated strokes. The leader strokes of the repeated strokes progress with much less velocity (≈ 1% of that of light) and do not branch. This Lightning Stroke Definition is called continuous leader, and return stroke for this leader follows with much less current. 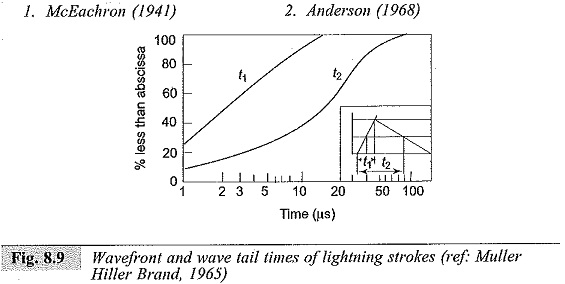 The interval between the repeated strokes may be from 0.6 ms to 500 ms with an average of 30 ms. Multiple strokes may last for 1 s. The total duration of the Mechanism of Lightning Strokes may be more than 1 s. The current from the ground by the main return stroke may have a peak value of 250,000 A, and rates of rise may be as high as 100 kA/μs or 1011 A/s. The time intervals between successive strokes, the number of successive strokes, the duration of Lightning discharges the discharge current, the rate of rise of current, and wavefront and wave tail times and their probability distribution are given in Figs 8.5 to 8.10. 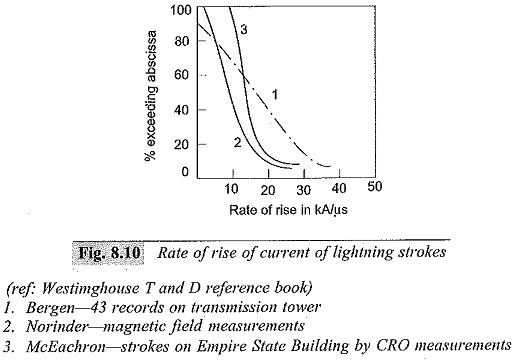