1. Direct stroke: In the direct stroke, the lightning discharge (i.e. current path) is directly from the cloud to the subject equipment e.g. an overhead line. From the line, the current path may be over the insulators down the pole to the ground. The overvoltages set up due to the stroke. may be large enough to flashover this path directly to the ground. The direct strokes can be of two types viz. (i) Stroke A and (ii) stroke B. 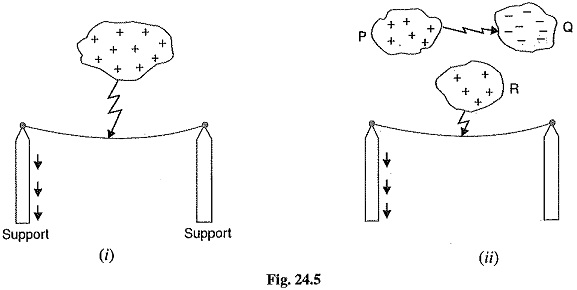 (i) In stroke A, the lightning discharge is from the cloud to the subject equipment i.e. an over­head line in this case as shown in Fig. 24.5 (1). The cloud will induce a charge of opposite sign on the tall object (e.g. an overhead line in this case). When the potential between the cloud and line exceeds the breakdown value of air, the lightning discharge occurs between the cloud and the line.

(ii) In stroke B, the lightning discharge occurs on the overhead line as a result of stroke A between the clouds as shown in Fig. 24.5 (ii). There are three clouds P, Q and R having positive, negative and positive charges respectively. The charge on the cloud Q is bound by the cloud R. If the cloud P shifts too near the cloud Q, then lightning discharge will Occur between them and charges on both these clouds disappear quickly. The result is that charge on cloud R suddenly becomes free and it then discharges rapidly to earth, ignoring tall objects.

Two points are worth noting about direct strokes. Firstly, direct strokes on the power system are very rare. Secondly, stroke A will always occur on tall objects and hence protection can be provided against it. However, stroke B completely ignores the height of the object and can even strike the ground. Therefore, it is not possible to provide protection against stroke B.

2. Indirect stroke: Indirect strokes result from the electrostatically induced charges on the conductors due to the presence of charged clouds. This is illustrated in Fig. 24.6. A positively charged cloud is above the line and induces a negative charge on the line by electrostatic induction. This negative charge, however, will be only on that portion of the line right under the cloud and the portions of the line away from it will be positively charged as shown in Fig. 24.6. The induced positive charge leaks slowly to earth via the insulators. When the cloud discharges to earth or to another cloud, the negative charge on the wire is isolated as it cannot flow quickly to earth over the insulators. The result is that negative charge rushes along the line is both directions in the form of travelling waves. It may be worthwhile to mention here that majority of the surges in a transmission line are caused by indirect Types of Lightning Strikes strokes.

A direct or indirect lightning stroke on a transmission line produces a steep-fronted voltage wave on the line. The voltage of this wave may rise from zero to peak value (perhaps 2000 kV) in about 1 μs and decay to half the peak value in about 5μs. Such a steep-fronted voltage wave will initiate travelling waves along the line in both directions with the velocity dependent upon the L and C parameters of the line.

(i) The travelling waves produced due to lightning surges will shatter the insulators and may even wreck poles.

(ii) If the travelling waves produced due to Types of Lightning Strikes hit the windings of a transformer or generator, it may cause considerable damage. The inductance of the wiiidings opposes any sudden passage of electric charge through it. Therefore, the electric charges “piles up” against the transformer (or generator). This induces such an excessive pressure between the windings that insulation may breakdown, resulting in the production of arc. While the normal voltage between the toms is never enough to start an arc, once the insulation has broken down and an arc has been started by a momentary overvoltage, the line voltage is usually sufficient to maintain the arc long enough to severely damage the machine.

(iii) If the arc is initiated in any part of the power system by the lightning stroke, this arc will set up very disturbing oscillations in the line. This may damage other equipment connected to the line.

Transients or surges on the power system may originate from switching and from other causes but the most important and dangerous surges are those caused by lightning. The lightning surges may cause serious damage to the expensive equipment in the power system (e.g. generators, transformers etc.) either by direct strokes on the equipment or by strokes on the transmission lines that reach the equipment as travelling waves. It is necessary to provide protection against both kinds of surges. The most commonly used devices for protection against lightning surges are :

Earthing screen provides protection to power stations and sub-stations against direct strokes whereas overhead ground wires protect the transmission lines against direct lightning strokes. Flow-ever; lightning arresters or surge diverters protect the station apparatus against both direct strokes and the strokes that come into the apparatus as travelling waves. We shall briefly discuss these methods of protection.

The power stations and sub-stations generally house expensive equipment. These stations can be protected against direct lightning strokes by providing earthing screen. It consists of a network of copper conductors (generally called shield or screen) mounted all over the electrical equipment in the sub-station or power station. The shield is properly connected to earth on at least two points through a low impedance. On the occurrence of direct stroke on the station, screen provides a low resistance path by which lightning surges are conducted to ground. In this way, station equipment is protected against damage. The limitation of this method is that it does not provide protection against the travelling waves which may reach the equipment in the station. 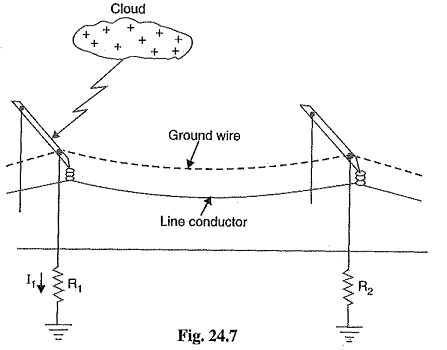 When the direct lightning stroke occurs on the transmission line, it will be taken up by the ground wires. The heavy lightning current (10 kA to 50 kA) from the ground wire flows to the ground, thus protecting the line from the harmful effects of Types of Lightning Strikes. It may be mentioned here that the degree of protection provided by the ground wires depends upon the footing resistance of the tower. Suppose, for example, tower-footing resistance is R1 ohms and that the lightning current from tower to ground is I1 amperes. Then the tower rises to a potential Vt given by ;