Types of Insulators in Transmission Lines:

The most commonly used material for insulators of overhead line is porcelain but glass, steatite and special composition materials are also used to a limited extent. Porcelain is produced by firing at a high temperature a mixture of kaolin, feldspar and quartz. It is stronger mechanically than glass, gives less trouble from leakage and is less effected by changes of temperature.

The successful operation of an overhead Groo line depends to a considerable extent upon cond the proper selection of insulators. There are several Types of Insulators in Transmission Lines but the most commonly used are pin type, suspension type, strain insulator and shackle insulator. 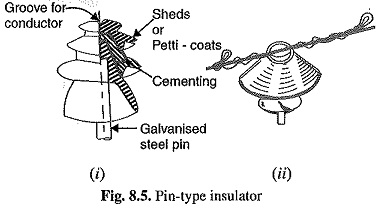 Causes of Insulator Failure: Insulators are required to withstand both mechanical and electrical stresses. The latter type is primarily due to line voltage and may cause the breakdown of the insulator. The electrical breakdown of the insulator can occur either by flash-over or puncture. In flash over, an arc occurs between the line conductor and insulator pin(i.e., earth) and the discharge jumps across the air gaps, following shortest distance. Fig. 8.6 shows the arcing distance (i.e. a + b + c) for the insulator. In case of flash-over, the insulator will continue to act in its proper capacity unless extreme heat produced by the arc destroys the Insulator. 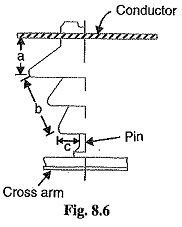 In case of puncture, the discharge occurs from conductor to pin through the body of the insulator: When such breakdown is involved, the insulator is permanently destroyed due to excessive heat. In practice, sufficient thickness of porcelain is provided in the insulator to avoid puncture by the line voltage. The ratio of puncture strength to flash-­over voltage is known as safety factor i.e.,

The cost of pin type insulator increases rapidly as the working voltage is increased. Therefore, In this Types of Insulators in Transmission Lines insulator is not economical beyond 33 kV. For high voltages (>33 kV), it is a usual practice to use suspension type insulators shown in Fig. 8.7. They consist of a number of porcelain discs connected in series by metal links in the form of a string. The conductor is suspended at the bottom end of this string while the other end of the string is secured to the cross arm of the tower. Each unit or disc is designed for low voltage, say 11 kV. The number of discs in series would obviously depend upon the working voltage. For instance, if the working voltage is 66 kV, then six discs in series will be provided on the string. 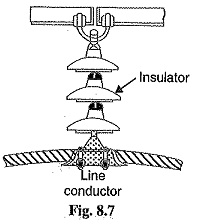 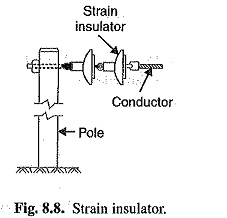 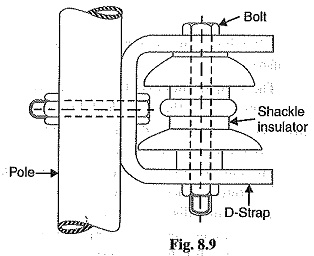