Skin Effect in Transmission Lines – When a conductor is carrying steady direct current (d.c.), this current is uniformly distributed over the whole X-section of the conductor. However, an alternating current flowing through the conductor does not distribute uniformly, rather it has the tendency to concentrate near the surface of the conduc­tor as shown in Fig. 9.3. This is known as skin effect.

The tendency of alternating current to concentrate near the surface of a conductor is known as skin effect. 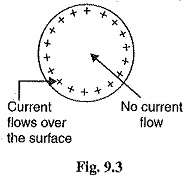 The Skin Effect in Transmission Lines depends upon the following factors :

3.Frequency – increases with the increase in frequency.

4.Shape of wire – less for stranded conductor than the solid conductor.

It may be noted that Skin Effect in Transmission Lines is negligible when the supply frequency is low (< 50 Hz) and conductor diameter is small (< 1 cm).