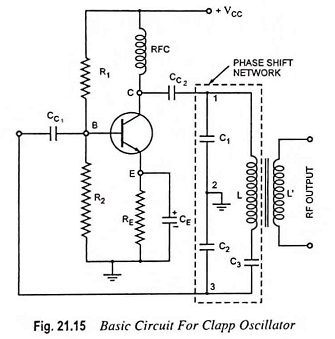 The operation of the circuit is the same as that of the Colpitt’s oscillator. As the circulating tank current flows through C1, C2 and C3 in series, the equivalent capacitance is

The frequency of oscillation is given as

Capacitors C1 and C2 are kept fixed while capacitor C3 is employed for tuning purpose.

In a Clapp oscillator C3 is much smaller than C1 and C2. As a result, the equivalent capacitance C is approximately equal to C3, and the frequency of oscillation is given as

However, precaution is to be taken in selection of C3. If capacitor C3 is made too small, the LC branch will not have a net inductive reactance and under such condition the circuit will refuse to oscillate.

High frequency stability can further be obtained by enclosing the entire circuit in a constant temperature chamber and by maintaining the supply voltage constant with the help of a zener diode.