To understand the operation of this Oscillator, let us study Basic RC Circuit, which is used in the feedback network of this oscillator. The Fig. 2.90 shows the Basic RC Circuit.

The capacitor C and resistance R are in series. Now XC is the capacitive reactance in ohms given by,

The total impedance of the circuit is,

The r.m.s. value of the input voltage applied is say Vi volts. Hence the current is given by,

From expression of current it can be seen that current I leads input voltage Vi by angle Φ.

The output voltage Vo is the drop across resistance R given by,

The voltage across the capacitor is,

By using proper values of R and C, the angle Φ is adjusted in practice equal to 60°

Hence Feedback Network in RC Phase Shift Oscillator consists of three RC sections each producing a phase shift of 60°, thus total phase shift due to feedback is 180° (3 x 60°). Such a feedback network is shown in the Fig. 2.91. 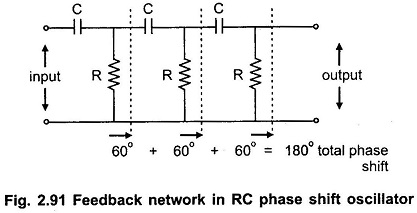 The network is also called the ladder network. All the resistance values and all the capacitance values are same, so that for a particular frequency, each section of R and C produces a phase shift of 60°. 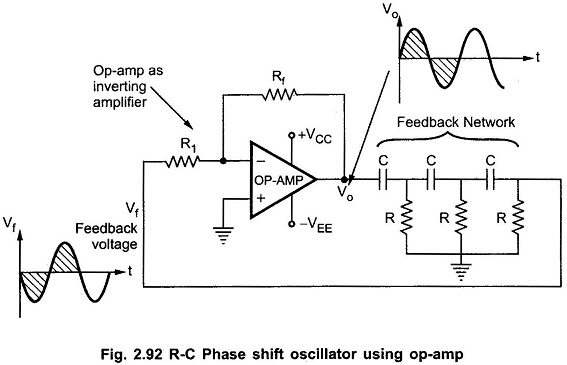 The output of amplifier is given to feedback network. The Output of feedback network drives the amplifier. The total phase shift around a loop is 180° of amplifier and 180° due to 3 RC section, thus 360°. This satisfies the required condition for positive feedback and circuit works as an oscillator.

The frequency of sustained oscillations generated depends on the values of R and C and is given by,

The frequency is measured in Hz.

At this frequency the gain of the op-amp must be at least 29 to satisfy Aβ = 1.

Now gain of the op-amp inverting amplifier is given by,

Thus circuit will work as an oscillator which will produce a sinusoidal waveform if gain is 29 and total phase shift around a loop is 360°. This satisfies the Barkhausen criterion for the oscillator. These oscillators are used over the audio frequency range i.e. about 20 Hz upto 100 kHz.

The Advantages of RC Phase Shift Oscillator are,

And the frequency stability is poor due to the changes in the values of various components, due to effect of temperature, ageing etc.