A PLL can be used as a Frequency Shift Keying Demodulator, as shown in the Fig. 2.132. 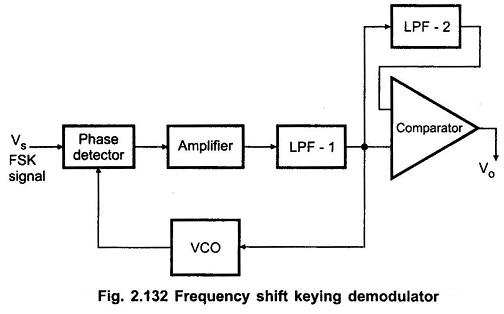 It is similar to the PLL demodulator for analog FM signals except for the addition of a comparator to produce a reconstructed digital output signal.

The difference between the two control voltage levels will be

The reference voltage for the comparator is derived from the additional low pass filter and it is adjusted midway between VC1 and VC2.

Therefore, for VC1 and VC2, comparator gives output ‘0’ and ‘1’, respectively.