The Product Demodulator (or detector), as shown in Figure 6-44, is virtually a mixer with audio output. It is popular for SSB, but is equally capable of demodulating all other forms of AM. hi the circuit shown, the input SSB signal is fed to the base via a fixed-frequency IF transformer, and the signal from a crystal oscillator is applied to the unbypassed emitter. The frequency of this oscillator is either equal to the nominal carrier frequency or derived from the pilot frequency, as applicable. 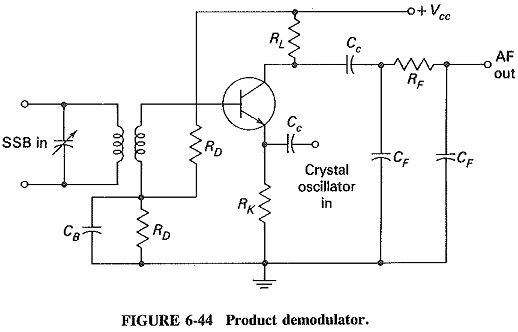 If this is a fairly standard double-conversion receiver, the IF fed to the Product Demodulator will be 455 kHz. If the USB is being received, the signal will cover the frequency band from 455.3 to 458.0 kHz for J3E (in R3E 455 kHz would also be present at this point). This signal is mixed with the output of the crystal oscillator, at 455 kHz. Several frequencies will result in the output, including the difference frequencies. These range from 300 to 3000 Hz and are the wanted audio frequencies. All other signals present at this point will be blocked by the low-pass filter consisting of capacitors CF and resistor RF in Figure 6-44. The circuit has recovered the wanted intelligence from the input signal and is therefore a suitable SSB demodulator.

If the lower sideband is being received, the missing carrier frequency is at 458 kHz, and the sideband stretches from 457.7 to 455 kHz. A new crystal must be switched in for the oscillator, but apart from that, the operation is identical.

Detection with the diode balanced modulator:

In a portable SSB transmitter-receiver, it is naturally desirable to employ as small a number of circuits as possible to save weight and power consumption. If a particular circuit is capable of performing either function, it is always so used, with the aid of appropriate switching when changing from transmission to reception. Since the diode balanced modulator can demodu­late SSB, it is used for that purpose in transceivers, in preference to the Product Demodulator. A circuit of the balanced modulator is shown in Figure 6-45.

As in carrier suppression, the output of the local crystal oscillator, having the same frequency as in the product detector (200 or 203 kHz, depending on the sideband being demodulated), is fed to the terminals 1-1′. Where the carrier-suppressed signal was taken from the modulator at terminals 3-3′, the SSB signal is now fed in.

The balanced modulator now operates as a nonlinear resistance and, as in the product detector, sum and difference frequencies appear at the primary winding of the AF transformer. This transformer will not pass radio frequencies and therefore acts as a low-pass filter, delivering only the audio frequencies to the terminals 2-2′, which have now become the output terminals of the demodulator. It is seen that this circuit recovers the information from the SSB signal, as required, and works very similarly to the Product Demodulator.