Darlington amplifier with voltage divider bias is shown in Fig. 19.50. In this circuit the output of one amplifier is coupled into the input of the next one by directly joining emitter of one transistor to the base of the other one, as shown in the figure. Obviously, the emitter current of the first transistor becomes the base current for the second transistor. 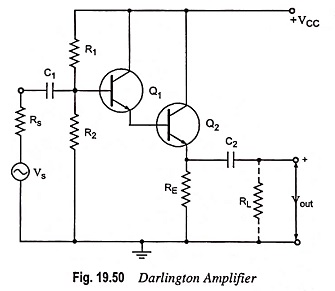 The biasing analysis is similar to that for one transistor except that two VBE drops are to be considered.

The Darlington amplifier circuit in its small signal ac form will appear, as shown in Fig. 19.51. 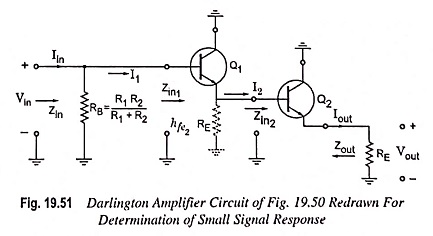 1. Current Gain: For the second stage:

On a good approximate basis, these equations cannot be applied to the first stage. The “fly in the ointment” is the closeness with which Zin2 compares with 1/hoe1. We have seen that 1/hoe, could be eliminated in the majority of the cases because the load impedance ZL << 1/hoe. For the Darlington Amplifier circuit the input impedance Zin2 is close enough in magnitude to 1/hoe to necessitate considering the effects of hoe1. We already discussed that, it was found that for single stage grounded emitter transistor amplifier, where 1/hoe was considered,

Applying the above equation to this situation,

Alternatively current gain can be obtained as follows:

It means Darlington amplifier behaves like a single transistor having current gain equal to β2.

Since Zin2 = hfe2RE, and 1/hoe1 will appear in parallel in the small signal equivalent circuit, so

Alternatively input impedance can be obtained as follows:

where r′e2 is the ac emitter resistance of second transistor.

This input impedance is very high because of the product of two betas,

If there is a load resistance RL coupled to the emitter of second transistor, then

3. Output Impedance: The output impedance Zout can be determined directly from the emitter equivalent circuits as follows:

Alternatively the output impedance Zout can be determined as follows :

That the output potential is the input potential less the base-­to-emitter potential of each transistor. It clearly indicates that Vout < Vin. Voltage gain is closer in magnitude to one than to zero.

On an approximate basis it is given as

(slightly less than unity) as in case of emitter follower

Note : r′e1 and r′e2 have been assumed to be equal and each one equal to r′e.

It has enormous impedance transformation capability i.e., it can transform a low impedance load to a high impedance load. Hence it is used in a high gain operational amplifier which depends on very high input impedance for its operation as an integrator or summing amplifier in analogue applications.