Resistor Transistor Logic (RTL) is a saturated logic and makes use of only transistors and resistors as circuit elements and also of resistors in the input to each base. This family is based on the NOR circuit. Its circuit diagram is shown in Fig. 47.1. 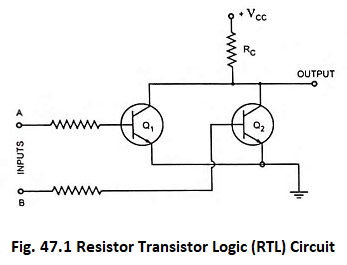 This technology, as already mentioned, has become obsolete.