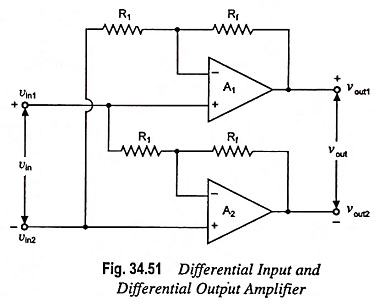 One possible arrangement of a differential input and differential output amplifier is given in Fig. 34.51. This circuit makes use of two identical op-amps.

Using the superposition theorem we have

The above equation reveals that the input and output are in phase or are of the same polarity provided that vin = vin1 – vin2 and vout = vout1 – vout2.

The circuit given in Fig 34.51 is very useful in noisy environments, especially if the input signal is comparatively smaller. This is because it rejects the common-mode noise voltages.