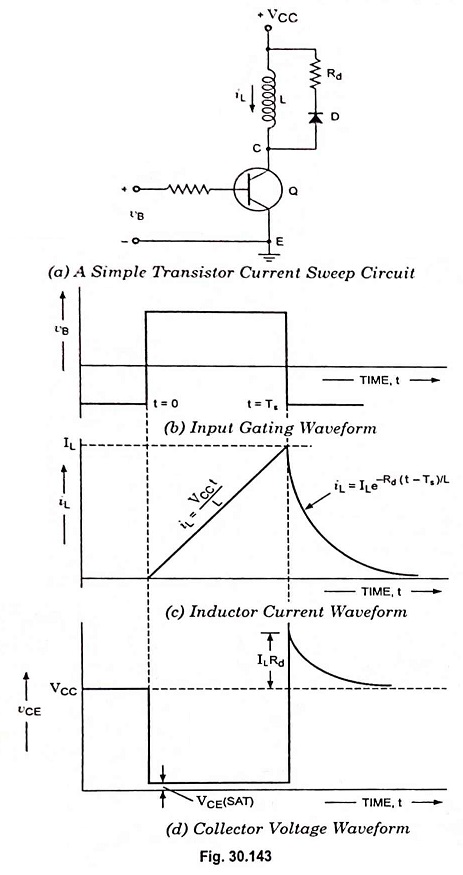 During this sweep interval the diode D being reverse biased does not conduct. The sweep terminates at t = Ts, when the gating signal drives the transistor to cut-off. The inductor current iL then continues to flow through the diode D and resistor Rd until it decays to zero. This decay is exponential with a time constant τ = L/Rd. This is because the current flowing through the inductor cannot change instantaneously. The inductor current waveform is depicted in Fig. 30.143 (c), where it is indicated that the gate duration Ts is such that the current attains a maximum value IL.

This peak voltage must be limited so that the transistor is below its collector-to-base breakdown voltage. As inductor current Id may well be determined by deflection requirements, there is clearly an upper limit to the size of Rd. The spike decays with the same time constant as does the inductor current. The noteworthy point is that while the spike duration depends on the inductance of L, the spike amplitude does not.

The inductance L normally represents a physical yoke and its resistance RL may not be negligibly small. If RCS is the collector saturation resistance of the transistor, the inductor current increases in accordance with the equation 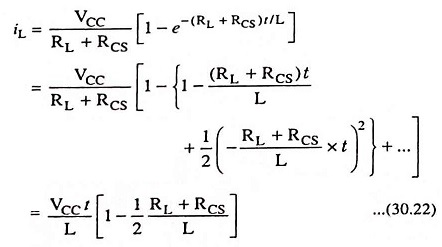 If the current increases linearly to a maximum value, the slope error is given as

For maintaining linearity, the voltage (RL + RCS)IL across the total circuit resistance must be kept small as compared to the supply voltage VCC.