The binary number system is simply another way to count. It is less complicated than the decimal number system because it is composed of only two digits 0 and 1. Just as the decimal system with its ten digits is a base-10 system, the binary system with its two digits is a base-2 system. These two digits namely 0 and 1 carry the same meaning as in the decimal system but different meaning is given to the position occupied by the numeral or digit. In a binary system, the base is 2, so any number can be expressed by an array of numerals representing the coefficients of power of 2 and not 10. In a binary system, the weight of each successively higher position (to the left) is an increasing power of 2.

To learn to count in binary, let us first look how we count in decimal number system. We start counting from 0, 1, 2, 3 and up to 9. After 9 we write 0 with 1 on its left side i.e., 10. Now we have two digit number. To continue counting, first digit of number i.e., 0 is again changed up to 9 and after that it is written 0 and second digit of number (which was earlier 1) is written 2. Thus we get number 20. This way we count the number up to 99. In further counting the number digit 99 is changed to 00 with digit 1 on the left side of these digits added. So we get number 100. This is the way of counting and writing down the numbers in decimal number system.

A comparable situation occurs when counting in binary, except that we have only two digits. Counting is started with zero and ended with next number 1. After 1 there is no other digit in this system so in further counting, digit 1 is replaced by 0 with digit 1 on its left side i.e., 10. Next number follows 11. Again after number 11 digit 00 is written with digit 1 on the left side i.e., 100. This way we count in binary system. Table 44.1 shows the equivalent binary numbers of decimal numbers from 0 to 15. This Table 44.1 makes us more clear about binary number system. 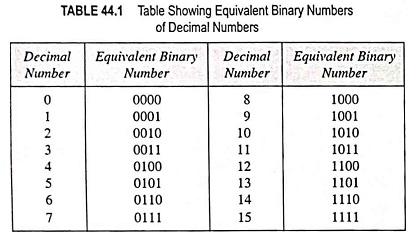 The binary number system is a positional system where each binary digit (bit) carries a certain weight based on its position relative to the least significant bit (LSB). The right-most bit is the LSB in a binary number and has a weight of 20 = 1. Any number can be converted to its decimal equivalent simply by adding the products of each bit and its weight. For example

The column weights of a binary number are

It can also be written as

and after solving the above equation, we get

Example 44.7: Convert the binary fractional number 0.1101 into its decimal equivalent.

Let us, for example, convert decimal number 19 into binary number to make above method clear. 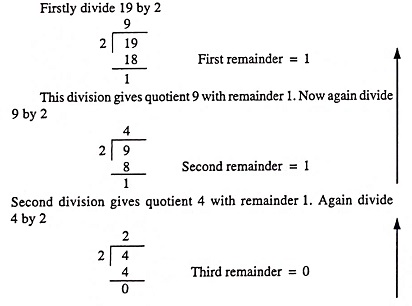 Let us, for example, convert fractional decimal number 0.65 into fractional binary number to make the method described above clear. 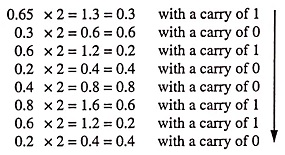 In above conversion we stopped after eight binary digits and, therefore, this result is approximate. We can continue multiplying by 2 until we get as many digits as necessary for our application in order to have required accuracy. 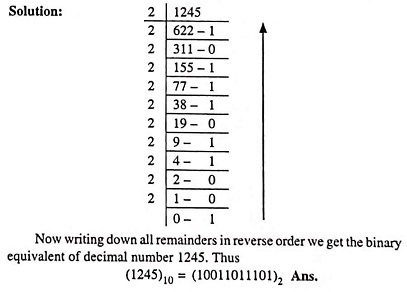 We are familiar with the arithmetic operations such as addition, subtraction, multiplication and division in a decimal number
system. Similar operations can be performed on binary numbers, infact, binary arithmetic is much simpler than decimal arithmetic because here only two digits, 0 and 1 are involved.

In binary number system, addition is the most important of the four operations of addition, subtraction, multiplication and division. By using ‘complements’, subtraction can be reduced to addition. Most digital computers subtract by complements. It leads to reduction in hardware because circuitry is required only for addition operation. Similarly, multiplication is nothing but repeated addition and, finally division is nothing but repeated subtraction.

There are four cases, described below for addition of binary numbers.

With the help of the above four cases, all binary numbers can be added.

Now in this case first of all least significant digits of binary numbers are added. These digits are 0 and 1. We know that addition of 0 and 1 gives us 1. So in first column we write 1 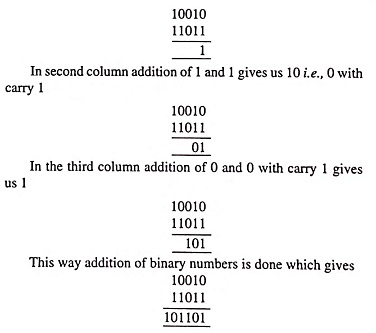 Again for subtraction of binary numbers, four cases are required to be considered while subtracting

First of all least significant column is taken for subtraction. In this case 1 is to be subtracted from zero. So 1 is borrowed from the next column of binary number 1010. Now subtraction of 1 from 10 gives 1 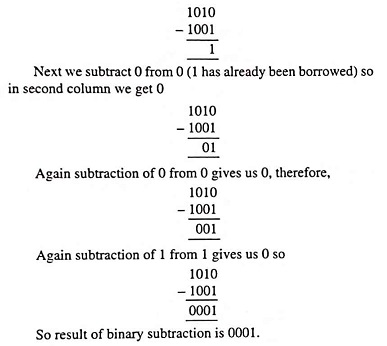 Example 44.18: will illustrate the procedure.

Binary division is obtained as decimal division. Following example will illustrate the procedure. 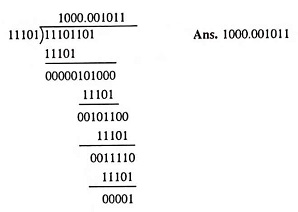 Shifting a Number To Left or Right: