Fuses Definition States that : A fuses is a short piece of metal, inserted in the circuit, which melts when excessive current flows through it and thus breaks the circuit.

The fuse element is generally made of materials having low melting point, high conductivity and least deterioration due to oxidation e.g., silver copper etc. It is inserted in series with the circuit to be protected. Under normal operating conditions, the fuse element is at a temperature below its melting point. Therefore, it carries the normal current without overheating. However, when a short-circuit or overload occurs, the current through the fuse increases beyond its rated value. This raises the temperature and fuse element melts (or blows out), disconnecting the circuit protected by it. In this way, a fuse protects the machines and equipment from damage due to excessive currents.

The time required to blow out the fuse depends upon the magnitude of excessive current. The greater the current, the smaller is the time taken by the fuse to blow out. In other words, a fuse has inverse time-current characteristics as shown in Fig. 20.1. Such a characteristic permits its use for over current protection. 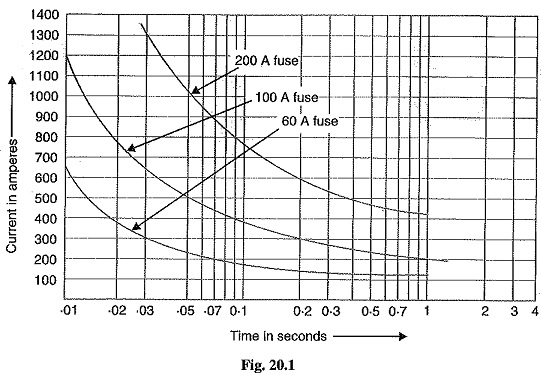 The function of a fuse is to carry the normal current without overheating but when the current exceeds its normal value, it rapidly heats up to melting point and disconnects the circuit protected by it. In order that it may perform this function satisfactorily, the fuse element should have the following desirable characteristics :

The above discussion reveals that no material possesses all the characteristics. For instance, lead has low melting point but it has high specific resistance and is liable to oxidation. Similarly, copper has high conductivity and low cost but oxidizes rapidly. Therefore, a compromise is made in the selection of material for a Fuses Definition.

The most commonly used materials for fuse element are lead, tin, copper, zinc and silver. For small currents up to 10 A, tin or all alloy of lead and tin (lead 37%, tin 63%) is used for making the fuse element. For larger currents, copper or silver is employed. It is a usual practice to tin the copper to protect it from oxidation. Zinc (in strip form only) is good if a Fuses Definition with considerable time-lag is required i.e., one which does not melt very quickly with a small overload.

The present trend is to use silver despite its high cost due to the following reasons :

The following terms are much used in the analysis of fuses :

For a round wire, the approximate relationship between fusing current I and diameter d of the wire is

where k is a constant, called the fuse constant. Its value depends upon the metal of which the fuse element is made. Sir W.H. Preece found the value of k for different materials as given in the table below :

The fusing current depends upon the various factors such as :

Its value is always more than one. The smaller the fusing factor, the greater is the difficulty in avoiding deterioration due to overheating and oxidation at rated carrying current. For a semi-en­closed or rewirable Fuses Definition which employs copper wire as the fuse element, the fusing factor is usually 2. Lower values of fusing factor can be employed for enclosed type cartridge fuses using silver or bimetallic elements. 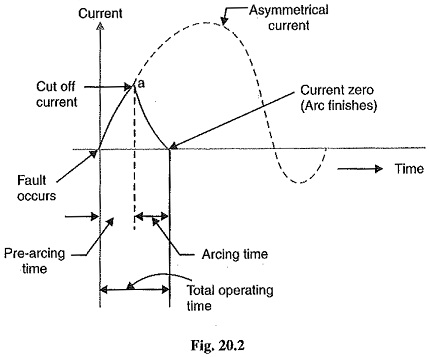 It is the r.m.s. value of the first loop of the fault current obtained if the fuse is replaced by an ordinary conductor of negligible resistance.

On the occurrence of a fault, the fault current has a very large first loop due to a fair degree of asymmetry. The heat generated is sufficient to melt the fuse element well before the peak of first loop is reached (point ‘a’ in Fig. 20.2). The current corresponding to point ‘a’ is the cut off current. The cut off value depends upon

It may be mentioned here that outstanding feature of fuse action is the breaking of circuit before the fault current reaches its first peak. This gives the Fuses Definition a great advantage over a circuit breaker since the most severe thermal and electro-magnetic effects of short-circuit currents (which occur at the peak value of prospective current) are not experienced with fuses. Therefore, the circuits protected by fuses can be designed to withstand maximum current equal to the cut-off value. This consideration together with the relative cheapness of fuses allows much saving in cost.

It may be noted that operating time of a fuse is generally quite low (say 0.002 sec.) as compared to a circuit breaker (say 0.2 sec or so). This is an added advantage of a fuse over a circuit breaker. A fuse in series with a circuit breaker of low-breaking capacity is a useful and economical arrangement to provide adequate short-circuit protection. It is because the fuse will blow under fault conditions before the circuit breaker has the time to operate.