Fuse is the simplest current interrupting device for protection against excessive currents. Since the invention of first fuse by Edison, several improvements have been made and now-a-days, a variety of Types of Fuses are available. Some fuses also incorporate means for extinguishing the arc that appears when the fuse element melts. In general, Types of Fuses may be classified into :

It is a usual practice to provide isolating switches in series with fuses where it is necessary to permit fuses to be replaced or rewired with safety. If such means of isolation are not available, the Types of Fuses must be so shielded as to protect the user against accidental contact with the live metal when the fuse carrier is being inserted or removed.

Low voltage fuses can be subdivided into two classes viz.,

1. Semi-enclosed Rewireable fuse: Rewireable fuse (also known as kit-kat type) is used where low values of fault current are to be interrupted. It consists of (i) a base and (ii) a fuse carrier. The base is of porcelain and carries the fixed contacts to which the incoming and outgoing phase wires are connected. The fuse carrier is also of porcelain and holds the Types of Fuses element (tinned copper wire) between its terminals. The fuse carrier can be inserted in Of taken out of the base when desired.

When a fault occurs, the fuse element is blown out and the circuit is interrupted. The fuse carrier is taken out and the blown out fuse element is replaced by the new one. The fuse carrier is then re­inserted in the base to restore the supply. This type of fuse has two advantages. Firstly, the detach­able fuse carrier permits the replacement of Types of Fuses element without any danger of coming in contact with live parts. Secondly, the cost of replacement is negligible.

2. High-Rupturing capacity (H.R.C.) cartridge fuse: The primary objection of low and uncertain breaking capacity of semi-enclosed rewireable fuses is overcome in H.R.C. cartridge fuse. Fig. 20.3 shows the essential parts of a typical H.R.C. cartridge fuse. It consists of a heat resisting ceramic body having metal end-caps to which is welded silver cuirent-carrying element. The space within the body surrounding the element is completely packed with a filling powder. The filling material may be chalk, plaster of paris, quartz or marble dust and acts as an arc quenching and cooling medium.

Under normal load conditions, the fuse element is at a temperature below its melting point.

Therefore, it carries the normal current without overheating. When a fault occurs, the current increases and the fuse element melts before the fault current reaches its first peak. The heat produced in the process vaporizes the melted silver element The chemical reaction between the silver vapour and the filling powder results in the formation of a high resistance substance which helps in quenching the arc.

3.H.R.C. fuse with tripping device: Sometime, H.R.C. cartridge fuse is provided with a tripping device. When the fuse blows out under fault conditions, the tripping device causes the circuit breaker to operate. Fig. 20.4 shows the essential parts of a H.R.C. fuse within tripping device. The body of the fuse is of ceramic material with a metallic cap rigidly fixed at each end. These are connected by a number of silver fuse elements. At one end is a plunger which under fault conditions hits the tripping mechanism of the circuit breaker and causes it to operate. The plunger is electrically connected through a fusible link, chemical charge and a tungsten wire to the other end of the cap as shown. 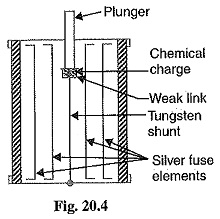 When a fault occurs, the silver fuse elements are the first to be blown out and then current is transferred to the tungsten wire. The weak link in series with the tungsten wire gets fused and causes the chemical charge to be detonated. This forces the plunger outward to operate the circuit breaker, The travel of the plunger is so set that it is not ejected from the fuse body under fault conditions.

Low voltage H.R.C. fuses may be built with a breaking capacity of 16,000 A to 30,000 A at 440V. They are extensively used on low-voltage distribution system against over-load and short-circuit conditions.

2. Liquid type: These Types of Fuses are filled with carbon tetrachloride and have the widest range of application to h.v. systems. They may be used for circuits upto about 100 A rated current on systems upto 132 kV and may have breaking capacities of the order of 6100 A.

Fig. 20.5 shows the essential parts of the liquid fuse. It consists of a glass tube filled with carbon tetrachloride solution and sealed at both ends with brass caps. The fuse wire is sealed at one end of the tube and the other end of the wire is held by a strong phosphor bronze spiral spring fixed at the other end of the glass tube. When the current exceeds the prescribed limit, the fuse wire is blown out. As the fuse melts, the spring retracts part of it through a baffle (or liquid director) and draws it well into the liquid. The small quantity of gas generated at the point of fusion forces some part of liquid into the passage through baffle and there it effectively extinguishes the arc.

3. Metal clad fuses: Metal clad oil-immersed fuses have been developed with the object of providing a substitute for the oil circuit breaker. Such Types of Fuses can be used for very high voltage circuits and operate most satisfactorily under short-circuit conditions approaching their rated capacity.

The current carrying capacity of a fuse element mainly depends on the metal used and the cross-sectional area but is affected also by the length, the state of surface and the surroundings of the fuse. When the fuse element attains steady temperature,

Expression (i) is known as ordinary fuse law.

Difference Between a Fuse and Circuit Breaker:

The Difference Between a Fuse and Circuit Breaker are shown in the below tabular form.