Modulation Frequency Definition is the process of impressing information on a carrier wave by altering either its amplitude of frequency. In amplitude modulation, the degree is the percentage of amplitude change from the unmodulated value of the carrier.

In Modulation Frequency Definition, the frequency deviation is the change in frequency in one direction from the centre frequency of the carrier. The degree of modulation is important, because it has a direct bearing on output power and band width. 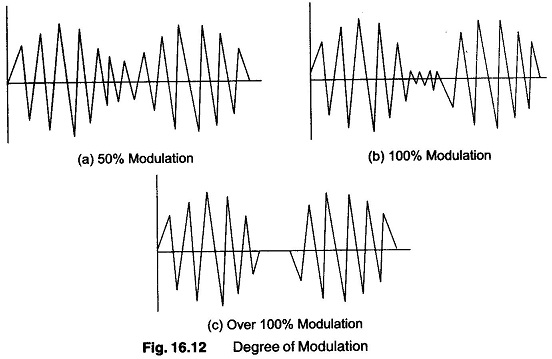 One method of measuring the degree of modulation makes use of a wave component separation and comparison test circuit. This circuit rectifies and filters the modulated waves and compares the ac and dc components of the resulting waveform. This process is illustrated in Fig. 16.13. 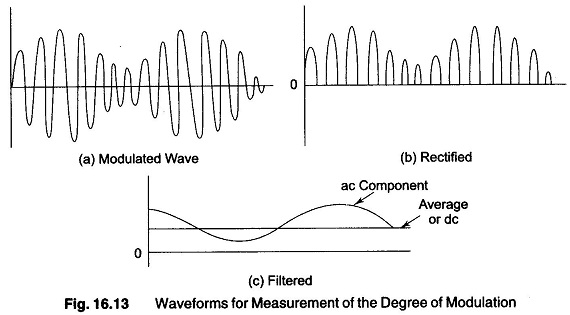 A basic test circuit arrangement for measuring the degree of modulation is shown in Fig. 16.14. 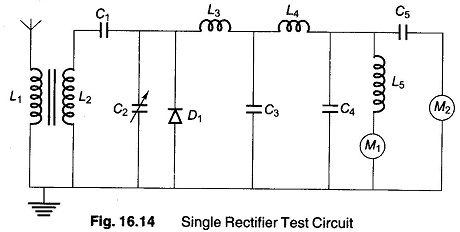 Since the ac meter reads effective values, 100% modulation causes the reading on M2 to be 0.707 of the reading on M1. This shows the modulating changes in amplitude is equal to twice the amplitude of the unmodulated carrier.

With 50% modulation, the carrier amplitude is equal to the modulating change in the amplitude; in this case the reading on meter M1 is nearly thrice the value of M2.

The circuit of Fig. 16.14 can be modified to provide a continuous reading directly in percentage of modulation, as illustrated in Fig. 16.15. 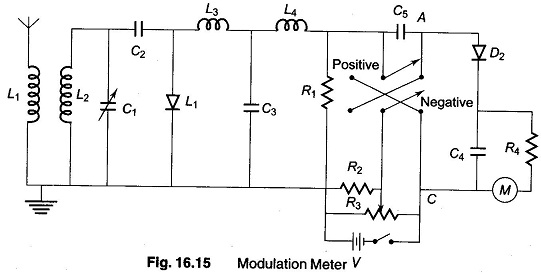 This circuit rectifies the difference in voltage between points A and C. This causes a current through the meter proportional to the percentage of modulation. The meter is calibrated directly in percentage modulation.

In FM modulation, the carrier amplitude remains constant and the modulated signal causes the carrier frequency to change.

Using the unmodulated carrier frequency as the reference, the modulated signal frequency varies about the reference frequency. The rate of deviation is the number of total changes per second, and is the same as the frequency of the modulating signal. The degree of deviation is the amount of frequency shift to either side of the reference frequency. The degree of deviation determines the band width of the transmitted signal and the number of sidebands it contains. In FM, all the intelligence is in the sidebands and it is desirable to retain as many sidebands as possible. The Federal Communication Commission allows a maximum deviation of 75 kHz on entertainment broadcast bands. This is narrow band FM transmission. Broad band FM transmission is allowed a much wider frequency deviation, up to several hundred MHz. The maximum allow­able deviation is often referred to as 100% modulation.