A Binary Ladder Circuits is constructed of resistors having only two values and thus overcomes the disadvantages of weighted resistors. The left end of the ladder is terminated in 2 R, as shown in Fig. 17.14.

Since there is no voltage source to the left of the node D, it can be replaced by 2R.

Hence a 1 in the MSB position provides an output voltage of +V/2.

Therefore, the left side network of node C with its The’venin equivalent, is clearly a resistance R in series with a voltage source of +V/2. The final equivalent circuit, the The’venin’s equivalent include, is

The various output voltages for the corresponding MSB are given in Table 17.4. 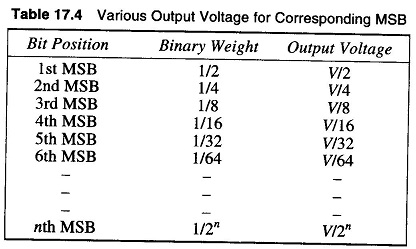