The cutaway view of a Cold Cathode Gas Filled Diode is shown in Fig. 5.24. It essentially consists of two electrodes, namely cathode and anode, mounted fairly close together in a glass envelope. The anode is in the form of a thin wire, while cathode is of cylindrical metallic surface having oxide coating. The anode (or plate) is always held at positive potential with respect to cathode. 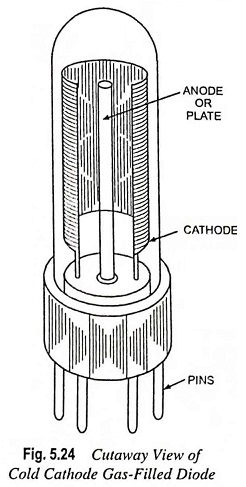 Circuit arrangement for studying the operation of a Cold Cathode Gas Filled Diode is shown in Fig. 5.25. The positive terminal of variable dc supply is connected to the anode through a current limiting resistor R and negative to the cathode. On increasing the applied voltage between anode and cathode, electric conduction through the tube passes through three successive discharge phases viz. Townsend discharge, the glow discharge and the arc discharge, as illustrated in Fig. 5.26. 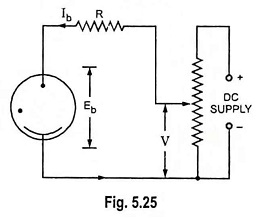 When applied voltage (an­ode-cathode voltage, Eb) is low, the tube conducts an extremely small current (say few μA) be­cause the cathode is cold and as such no source of electrons is present. However, some ioniza­tion of gas is caused by natural sources, such as cosmic rays etc., and a few free electrons are pro­duced. These free electrons move towards the anode and constitute a small current in the circuit. This stage of conduction is known as Townsend discharge, after the name of J.S. Townsend who in­vestigated the V-I characteristics of Cold Cathode Gas Filled Diode (glow tube) for the first time in 1901. In this phase of conduction, no visible light is associated and the current is known as dark cur­rent. 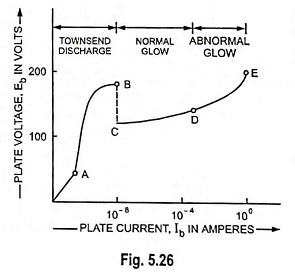 As the applied voltage is increased, the electrons acquire more and more energy and stage, known as ionization or striking or breakdown voltage, arrives when the gas starts getting ionized and the tube current rises dramatically to a large value. The voltage drop across the tube Eb drops to a low value because of decrease in the internal resistance of tube due to ionization of gas. This voltage drop across the tube, Eb remains constant regardless of plate current Ib. Simultaneously glow is seen in the gas and on a portion of the cathode. That is why this phase of conduction is known as glow discharge. In the glow discharge region, the glow tube maintains a constant voltage across it although there is an appreciable increase in tube current Ib. This is explained as below:

In this region, increase in supply voltage V causes increase in plate current Ib which increases the voltage drop in the series resistor R but the voltage across the tube Eb remains constant. This is only possible if the internal resistance of the tube decreases with the increase in its current and that is exactly what happens in the tube. With the increase in tube current, the degree of ionization increases and the glow covers a greater part of the cathode surface. Thus cross section area of ionized gas path between anode and cathode is increased and internal resistance of the tube, being inversely proportional to the area of x-section, decreases. Hence, the voltage across the tube, Eb, in the glow discharge region remains constant.

The Cold Cathode Gas Filled Diode or glow tube has an outstanding characteristic of maintaining constant voltage across it in the normal glow discharge region. This unique characteristic renders it suitable for many industrial and control applications. A few of such applications are enumerated here.