Gas Actuated Relays – When a fault occurs inside the transformer tank gas is usually generated, slowly for an incipient fault and violently for heavy faults. Most short circuits developed either by impulse breakdown between adjacent turns at the end turns of the winding or as a very poor initial point contact which will immediately heat to arcing temperature. The heat produced by the high local current causes the transformer oil to decompose and produce a gas which can be made use of to detect the winding faults. Based on this the following relays are available:

Buchholz relay is the simplest form of protection which is commonly used in all transformers provided with conservator. It consists of a chamber connected in the upper side of the pipe run between the oil conservator and the transformer tank, and containing two cylindrical floats, one near the top of the chamber and the other opposite the orifice of the pipe to the transformer (Fig. (6.10)).

Under normal conditions the floats are up, but on the occurrence of, say a between-turns fault gas bubbles produced by the breakdown of the oil flow out of the transformer in the direction of the conservator. On reaching the Buchholz relay they are trapped and thereby reduce the oil level in the chamber and cause the upper float to fall. This is usually a slow fault and when the float has fallen through a predetermined distance a pair of contacts, which are controlled by the float, close and give an audible or visual warning. 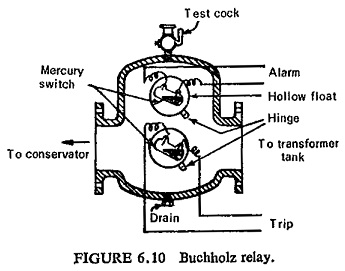 However, if the fault is heavy, the surge of gas and oil up the pipe towards the conservator engages the lower float which is pushed over instantaneously and engages its associated contacts which in turn trip the circuit breaker. Leakage of oil causes the upper float to operate and if persistent will also cause the lower float to operate. Care must be taken during oil changing to avoid spurious signals.

The main advantage of Buchholz relays are that they indicate incipient faults, for example, between turns faults or core heating and so may enable a transformer to be taken out of service before serious damage occurs. One important limitation, however, is that they do not protect the connecting cables which must therefore have a separate protection.

Hermetically sealed transformers are common in the United States. These transformers are sometimes fitted with hydraulic relays which respond to the rate of change of pressure in the gas cushion above the oil.