Like impedance relays, Distance Protection by Reactance Relays are also amplitude comparators and thus require an additional directional unit. Although the performance of reactance relays on single-fed systems is not unduly affected by fault resistance, there may be occasions in double-fed systems where errors in reach may occur, particularly when the phase relation between the respective source emfs is widely different and the value of fault resistance high.

Figure (5.25) shows the 3-zone characteristics of plain reactance units and two reactance units with an additional mho unit which acts as a directional unit and also as a zone 3 protection and for starting. The mho unit prevents the undesirable operation of reactance units under load conditions. Time coordination is very important in such a scheme, in that care should be taken to ensure that zone 1 and 2 measurement cannot occur after the starting relay has dropped off, since it is possible for reactance relays to operate under load conditions. 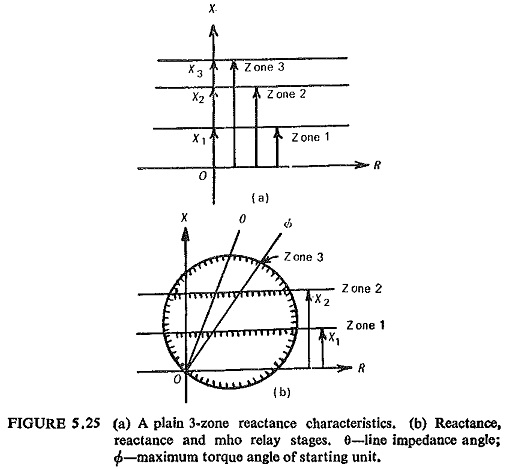 The arrangement of contact circuit of Distance Protection by Reactance Relays is shown in Fig. (5.26). The maximum torque angle or sensitivity angle of the starting unit (Φ) is made smaller than the line angle (θ) for reducing the effect of fault resistance on the reach of the relay.

It is also possible to have all the three zones as reactance units and a mho unit which acts as directional unit and starting unit. Such a scheme will also provide tolerance to fault resistance in zone 3. 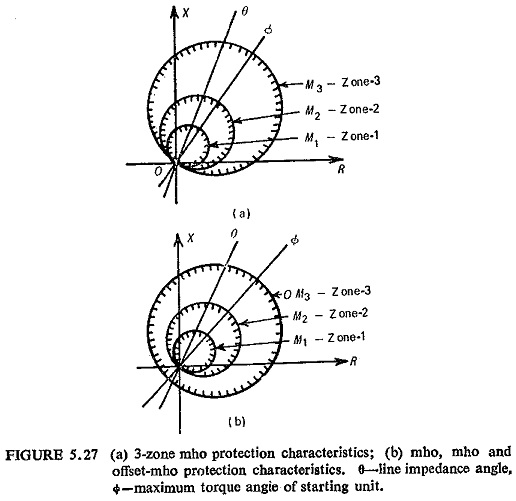 Zone 3 mho unit which acts as a starting relay or for controlling the timer can also be replaced by an offset-mho unit which has a definite advantage under closeup fault conditions as it encloses the origin. Contact arrangement is shown in Fig. (5.28).