Distance Protection Impedance Relay – It has already been pointed out that the impedance is directly proportional to the length of the line, and hence an impedance relay which measures impedance can be used to recognise a fault condition and operate. As such an impedance relay has no directional feature and will operate irrespective of the direction of current.

Figure (5.23) shows the characteristics for a 3-zone impedance relay with directional unit D. It is usual to make maximum torque angle Φ of the electromagnetic relays, smaller than the line angle θ.

In ease of static relays the maximum sensitivity angle is made less than θ. This is done in order to reduce the effect of are resistance on the reach of the relay. 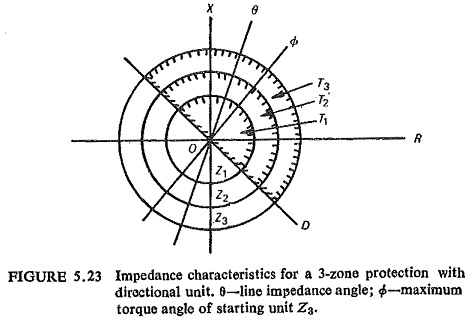 The zone 3 element Z3 controls the operation of the timer and thus is the starting unit, the contact circuit is shown in Fig. (5.24).

The zone 1 element operates without any intentional time delay, but still it has some finite time of operation T1, whereas Z2 and Z3 operate with a time delay of T2 and T3 respectively.