A distance relay is set to operate up to a particular value of impedance; for an impedance greater than this set value the relay should not operate. This impedance, or the corresponding distance is known as the Reach of Distance Relay.

An important reason for overreach is the presence of d.c. offset in the fault current wave, as the offset current has a higher peak value than that of a symmetrical wave for which the relay is set.

The transient overreach is defined as:

Zos = the maximum impedance for which the relay will operate with an offset current wave, for a given adjustment

Zsy = the maximum impedance for which the relay will operate for symmetrical currents for the same adjustment as for Zos.

A distance relay may underreach because of the introduction of fault resistance as illustrated in Fig. (5.21). Relay at O is set for protection up to P. Now if a fault at P occurs such that fault resistance (PP’) is high and by adding this resistance the impedance seen by the relay is OP’ such that P’ lies outside the operating region of the relay, then the relay does not operate. 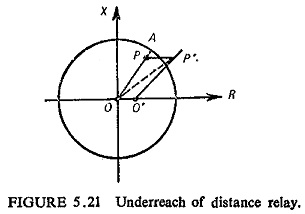