Operation: Under normal operating conditions of this Definite Distance Type Impedance Relay, the pull due to the voltage element is greater than that of the current element. Therefore, the relay contacts remain open. However, when a fault occurs in the protected zone, the applied voltage to the relay decreases whereas the current increases. The ratio of voltage to current (i.e. impedance) falls below the pre-determined value. Therefore, the pull of the current element will exceed that due to the voltage element and this causes the beam to tilt in a direction to close the trip contacts.

The pull of the current element is proportional to I2 and that of voltage element to V2. Consequently, the relay will operate when

The value of the constants k1 and k2 depends upon the ampere-turns of the two electromagnets. By providing tappings on the coils, the setting value of the relay can be changed.

A time-distance impedance relay is one which automatically adjusts its operating time according to the distance of the relay from the fault point i.e.

Construction: Fig. 21.22 shows the schematic arrangement of a typical induction type time-distance impedance relay. It consists of a current driven induction element similar to the double-winding type induction overcurrent relay (refer back to Fig. 21.8). The spindle carrying the disc of this element is connected by means of a spiral spring coupling to a second spindle which carries the bridging piece of the relay trip contacts. The bridge is normally held in the open position by an armature held against the pole face of an electromagnet excited by the voltage of the circuit to be protected. 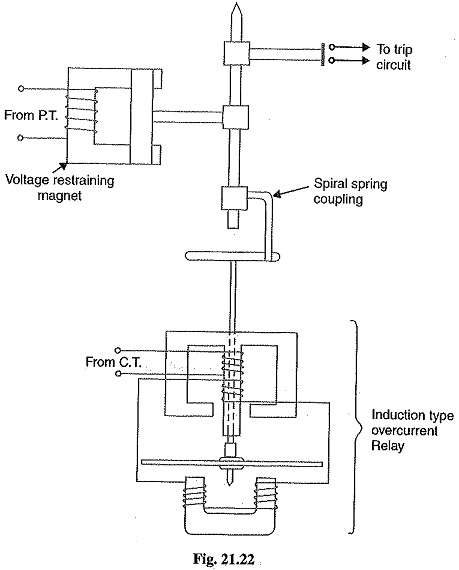 Operation: Under normal load conditions, the pull of the armature is more than that of the induction element and hence the trip circuit contacts remain open. However, on the occurrence of a short-circuit, the disc of the induction current element starts to rotate at a speed depending upon the operating current. As the rotation of the disc proceeds, the spiral spring coupling is wound up till the tension of the spring is sufficient to pull the armature away from the pole face of the voltage-excited magnet. Immediately this occurs, the spindle carrying the armature and bridging piece moves rapidly in response to the tension of the spring and trip contacts are closed. This opens the circuit breaker to isolate the faulty section.

The speed of rotation of the disc is approximately proportional to the operating current, neglecting the effect of control spring. Also the time of operation of the relay is directly proportional to the pull of the voltage-excited magnet and hence to the line voltage V at the point where the relay is connected. Therefore, the time of operation of relay would vary as V/I i.e. as Z or distance.