This Induction Type Directional Power Relay operates when power in the circuit flows in a specific direction Unlike a non-directional overcurrent relay, a directional power relay is so designed that it obtains its operating torque by the interaction of magnetic fields derived from both voltage and current source of the circuit it protects. Thus this type of relay is essentially a wattmeter and the direction of the torque set up in the relay depends upon the direction of the current relative to the voltage, with which it is associated. 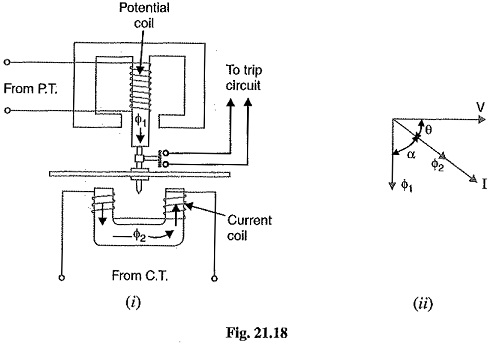 Constructional details: Fig. 21.18 shows the essential parts of a typical induction type directional power relay. It consists of an aluminum disc which is free to rotate in between the poles of two electromagnets. The upper electromagnet carries a winding (called potential coil) on the central limb which is connected through a potential transformer (P.T.) to the circuit voltage source. The lower electromagnet has a separate winding (called current coil) connected to the secondary of C.T. in the line to be protected. The current coil is provided with a number of tappings connected to the plug-setting Midge (not shown for clarity). This permits to have any desired current setting. The restraining torque is provided by a spiral spring.

The spindle of the disc carries a moving contact which bridges two fixed contacts when the disc has rotated through a pre-set angle. By adjusting this angle, the travel of the moving disc can be adjusted and hence any desired time-setting can be given to the relay.

[See vector diagram in Fig. 21.18 (ii)]. The interaction of fluxes Φ1 and Φ2 with the eddy currents induced in the disc produces a driving torque given by :