In the case of Directional Earth Fault Relay the angular relationship of residual current and residual voltage is independent of the faulted phase and is governed only by the R/X ratio of the fault path. The current coil of the directional element is connected to detect current in the residual circuit of the CTs and the voltage coil is connected to a suitable voltage source to give sufficient torque. Thus for a residual current Ir and residual voltage Vr the torque will be proportional to IrVr cos (Φ-θ) where θ is the maximum torque angle of the relay and Φ is the angle between applied voltage and current. 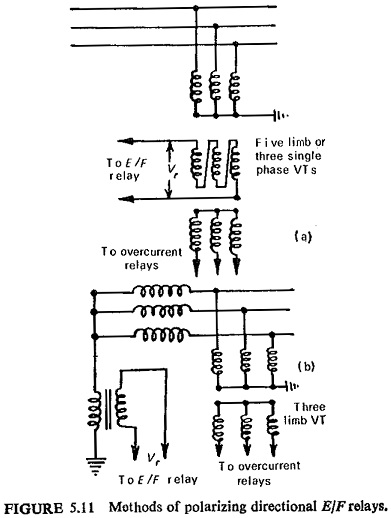 The residual current as shown earlier is obtained with the help of three CTs. A common arrangement for obtaining residual voltage employs a five-limb voltage transformer or its equivalent with a star-connected primary, the star point being earthed, and an open delta secondary. The voltage across the open delta is applied to the voltage coil of the directional element of the relay. This is illustrated in Fig. (5.11a).

The magnitude of Vr when a fault occurs depends on the method of earthing the system neutral, and the fault resistance. An earth fault causes the system neutral to shift in case of systems earthed through some impedance. It can be shown that:

A resistance earthed system provides the most satisfactory conditions for relay operation. It facilitates the tripping of the faulted circuit without undue delay (i.e. within a few seconds).

For low-impedance or solidly earthed systems the relays are designed to operate with low residual voltages. The production of full flux at very low voltage may give excessive saturation of the voltage-coil core at nominal voltage, leading to over loading of the VT. This is a major design consideration. 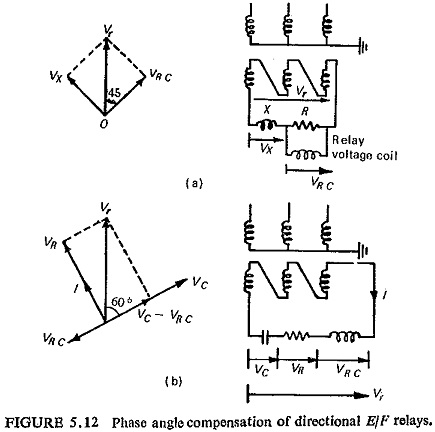 The second method is illustrated in Fig. (5.12b). It can be seen that the relay coil voltage can be arranged to lead the residual voltage by 120° and the required lag of 60° is obtained by reversing the coil connections. 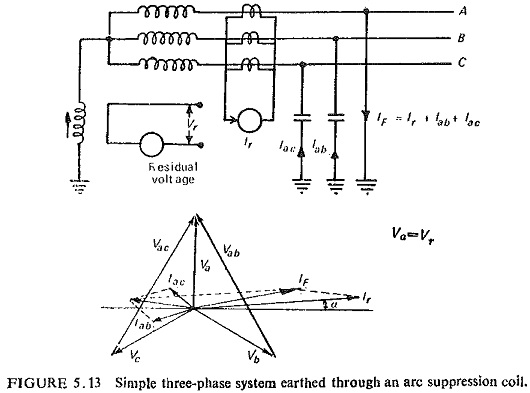 In case of multi-feeder system it is necessary to detect as to which circuit is faulted. A supersensitive Directional Earth Fault Relay is used on each feeder. Consider a case of n feeders each provided with a sensitive earth-fault relay of the type shown above. It can be seen that the relays on the healthy circuits restrain and the relay on the faulted circuit operates. No capaci­tive current flows in phase A of any healthy feeder since this phase is at earth potential. Figure (5.14) illustrates one such system. Assuming that the circuits have equal capacitances and resistances, the total capacitive current per feeder is 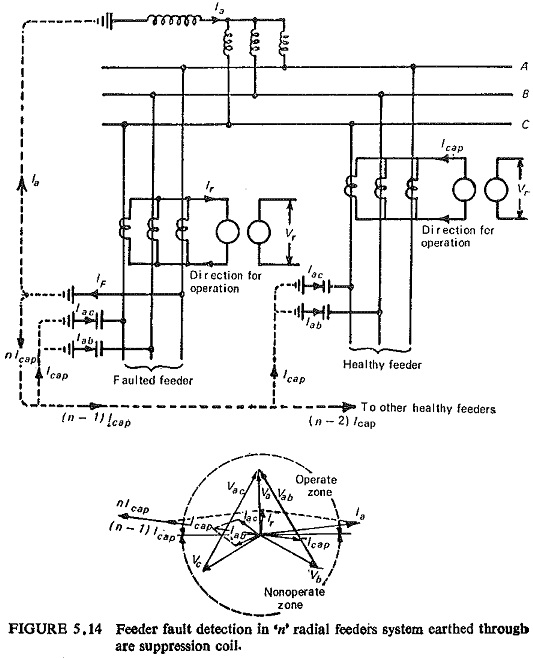