In small-size alternators, the neutral ends of the three-phase windings are often connected internally to a single terminal. Therefore, it is not possible to use Merz-Price circulating current principle described above because there are no facilities for accommodating the necessary current transformers in the neutral connection of each phase winding. Under these circumstances, it is considered sufficient to provide protection against earth-faults only by the use of Balanced Earth Fault Protection scheme. This scheme provides no protection against phase-to-phase faults, unless and until they develop into earth-faults, as most of them will. 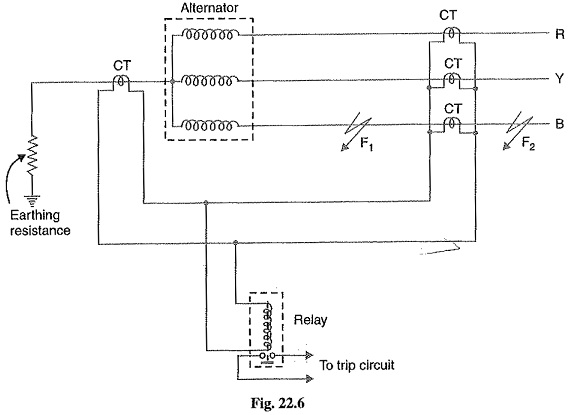 If an earth-fault develops at F2 external to the protected zone, the sum of the currents at the terminals of the alternator is exactly equal to the current in the neutral connection and hence no current flows through the relay. When an earth-fault occurs at F1 or within the protected zone, these currents are no longer equal and the differential current flows through the operating coil of the relay. The relay then closes its contacts to disconnect the alternator from the system.

Merz-price circulating-current system protects against phase-to-ground and phase-to-phase faults. It does not protect against turn-to-turn fault on the same phase winding of the stator. It is because the current that this type of fault produces flows in a local circuit between the turns involved and does not create a difference between the currents entering and leaving the winding at its two ends where current transformers are applied. However, it is usually considered unnecessary to provide protection for inter-turn faults because they invariably develop into earth-faults. 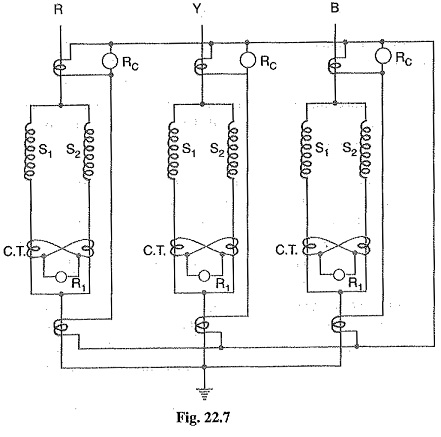