Figure 11.4 shows a Single Line to Ground Fault at F in a power system through a fault impedance Zf. The phases are so labelled that the fault occurs on phase a. 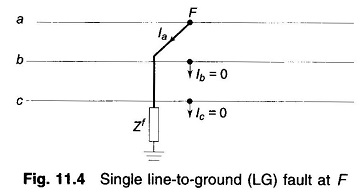 At the fault point F, the currents out of the power system and the Single Line to Ground Fault are constrained as follows:

The symmetrical components of the fault currents are

from which it is easy to see that

Expressing Eq.(11.4) in terms of symmetrical components, we have

As per Eqs. (11.5) and (11.6) all sequence currents are equal and the sum of sequence voltages equals 3Zf Ia1. Therefore, these equations suggest a series connection of sequence networks through an impedance 3Zf as shown in Figs. 11.5a and b. 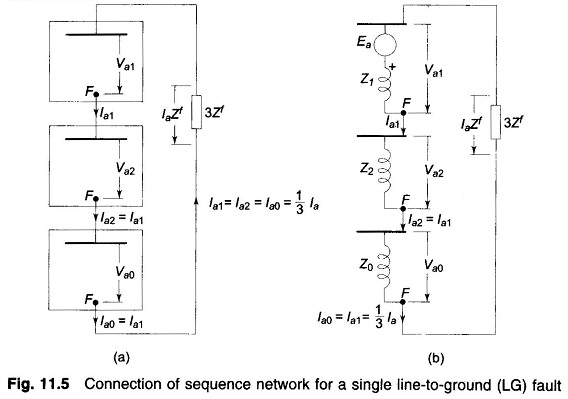 In terms of the Thevenin equivalent of sequence networks, we can write from Fig. 11.5b.

Fault current Ia is then given by

The voltage of line b to ground under fault condition is

Substituting for Ia from Eq. (11.8) and reorganizing, we get

The expression for Vc can be similarly obtained.

The above remarks are valid for the positive sequence network, independent of the type of fault.