Uses of Ground Wave Propagation along the surface of the earth and, as previously mentioned, must be vertically polarised to prevent short circuiting the electric component. A wave induces currents in the ground over which it passes and thus loses some energy by absorption. This is made up by energy diffracted downward from the upper portions of the wavefront.

There is another way in which the surface wave is attenuated: because of diffraction, the wavefront gradually tilts over, as shown in Figure 8-12. As the wave propagates over the earth, it tilts over more and more, and the increasing tilt causes greater short circuiting of the electric field component of the wave and hence field strength reduction. Eventually, at some distance (in wavelengths) from the antenna, as partly determined by the type of surface over which the Uses of Ground Wave Propagation taking place, the wave “lies down and dies.” It is important to realise this, since it shows that the maximum range of such a transmitter depends on its frequency as well as its power. Thus, in the VLF band, insufficient range of transmission can be cured by increasing the transmitting power. This remedy will not work near the top of the MF range, since propagation is now definitely limited by tilt. 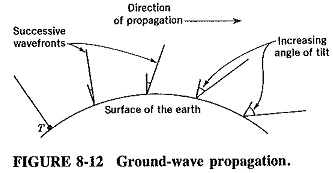 Field strength at a distance:

Radiation from an antenna by means of the Uses of Ground Wave Propagation gives rise to a field strength at a distance, which may be calculated by use of Maxwell’s equations. This field strength, in volts per meter, is given in Equation (8-10), which differs from Equation (8-5) by taking into account the gain of the transmitting antenna.

If a receiving antenna is now placed at this point, the signal it will receive will be, in volts,

d = distance from the transmitting antenna

If the distance between the two antennas is fairly long, the reduction of field strength due to ground and atmospheric absorption reduces the value of the voltage received, making it less than shown by Equation (8-11). Although it is possible to calculate the signal strength reduction which results, altogether too many variables are involved to make this worthwhile. Such variables include the salinity and resistivity of the ground or water over which the wave propagates and the water vapor content of the air. The normal procedure is to estimate signal strength with the aid of the tables and graphs available.

When propagation is over a good conductor like seawater, particularly at frequencies below about 100 kHz, surface absorption is small, and so is attenuation due to the atmosphere. Thus the angle of tilt is the main determining factor in the long-distance propagation of such waves. The degree of tilt depends on the distance from the antenna in wavelengths, and hence the early disappearance of the surface wave in HF propagation. Conversely, because of the large wavelengths of VLF signals, waves in this range are able to travel long distances before disappearing (right around the globe if sufficient power is transmitted).

At distances up to 1000 km, the Uses of Ground Wave Propagation is remarkably steady, showing little diurnal, seasonal or annual variation. Farther out, the effects of the E layer’s contribution to propagation are felt. Both short- and long-term signal strength variations take place, the latter including the 11-year solar cycle. The strength of low-frequency signals changes only very gradually, so that rapid fading does not occur. Transmission at these wave­lengths proves a very reliable means of communication over long distances.

The most frequent users of long-distance VLF transmissions are ship communications, and time and frequency transmissions. Ships use the frequencies allocated to them, from 10 to 110 kHz, for radio navigation and maritime mobile communications. The time and frequency transmissions operate at frequencies as low as 16 kHz (GBR, Rugby, United Kingdom) and 17.8 kHz (NAA, Cutler, Maine). They provide a world­, wide continuous hourly transmission of stable radio frequencies, standard time inter­vals, time announcements, standard musical pitch, standard audio frequencies and radio propagation notices. Such services are also duplicated at HF, incidentally, by stations such as WWV (Ft. Collins, Colorado) and WWVH (Hawaii) operating at 2.5 MHz and the first five harmonics of 5 MHz.

Since VLF antennas are certain to be inefficient, high powers and the tallest possible masts are used. Thus we find powers in excess of 1 MW transmitted as a rule, rather than an exception. For example, the U.S. Naval Communications Station at North-West Cape (Western Australia) has an antenna farm consisting of 13 very tall masts, the tallest 387 m high; the lowest transmitting frequency is 15 kHz.