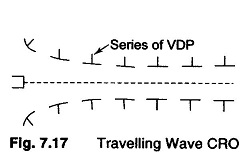 In an ordinary CRO, there is only one pair of VDPs. When the signal to be displayed is of a very high frequency CRT, the electron beam does not get sufficient time to pick up the instantaneous level of the signal. Also, at high frequency CRT the numbers of electrons striking the screen in a given time and the intensity of the beam is reduced. Hence, instead of one set of vertical deflection plates, a series of vertical deflection plates are used.

The plates are so shaped and spaced that an electron travelling along the CRT receives from each set of plates an additional deflecting force in proper time sequence. This synchronization is achieved by making the signal travel from one plate to the next at the same speed as the transit time of the electrons.

The time delays between the plates correspond exactly to the transit times of the electrons. (In addition, new fluorescent materials have now been developed to increase the brightness at HF.)

Characteristics of a HF CRO or (HF Improvement in a CRO):